Microgaming’s Gift of Giving Announce the Winners for 2016 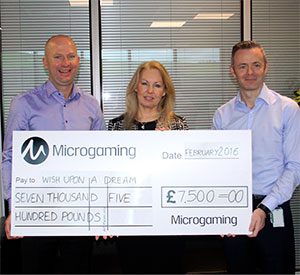 Four global charitable organizations were awarded a £30,000 donation that was provided by Microgaming over its PlayItForward initiative. This company’s clients were given the opportunity to vote and choose one charity in the region out of several which were selected for voting.

This is a fourth year the Gift of Giving campaign is being held, and this December’s polling was a kind of a special festive donation during which £30,000 was divided in the same way among four international regions – Isle of Man, UK and Europe, Africa and Rest of the World winning organizations received £7,500 each.

Microgaming Gives Back to the Community

Charitable organization that was awarded the donation for the Isle of Man region was Women’s Refuge. This charity is a Manx-registered organization that helps with women and children who are suffering domestic violence or abuse by offering them safe transitory accommodation. This organization exists for 20 years now, and is run by unpaid board members and volunteers. Only this year the organization received a stunning 512 requests from people that needed help or advice, and Microgaming’s donation will at least give support for maintaining vital services of this brave initiative.

The organization which had the highest number of votes for UK and Europe region was Teenage Cancer Trust. This important charity helps young people suffering from cancer by giving them care and support during this painful and delicate time. A devastating fact that even seven young individuals from the UK,  aged between 13 and 24, get to hear that they are diagnosed with cancer on a daily basis. The donation that this Trust received will be for sure used wisely and where most necessary because just like in this organization say “a young person’s life shouldn’t stop just because they have cancer”.

Africa Was Not Forgotten

Save the Rhino was the third organization to receive the donation from Microgaming this year which was decided on the basis of votes that went for the region of Africa. This charity with its associates supports rhinos in Africa and Asia with the aim to protect gentle populations of rhinos for upcoming generations in their natural habitat. This will be the sixth year since the numbers show the terrible tendency of increasing the quantity of illegally killed rhinos through Africa. Only in 2015, 1,338 rhinos have been missing and the only thing that could stop this dreadful inclination is the knowledge and skill that Save the Rhino with in collaboration with its partners has to offer. Save the Rhino received the donation last year as well.

In the Rest of the World category medical humanitarian association, Médecins Sans Frontières, were rewarded the biggest number of votes. This independent international charity provides emergency assistance to people in war areas, affected by epidemics, natural catastrophes or to those excluded from healthcare. Médecins Sans Frontières were established in 1971 in France, and now with its assistance the organization covers 69 countries all over the world. Now more than ever the support for MSF could be crucial since unfortunately the workload for medical staff is increasing day after day. This humanitarian organization was also awarded the donation in 2014.

Claire Coleman, Head of Microgaming PlayItForward, thanked all Microgaming’s customers who took time to vote and with it concluded the fourth annual Gift of Giving program.