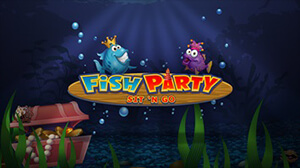 The jackpot was hit on March 29 and represents the fourth biggest win on the Microgaming network.

The Microgaming's Progressive Jackpot Network, the largest one in the industry, has been known to award neat prizes. That's probably the main reason why so many players love to play games developed by the Isle of Man-headquartered gaming company.

The latest Microgaming release to award a massive jackpot is a progressive slot titled Fish Party Sit & Go, which has recently paid out a prize worth €117,341.

According to a statement made by Microgaming, this stunning jackpot was hit on March 29 and represents the fourth biggest win on the network since this game hit the market back in July 2016. With this jackpot, the total amount awarded by Fish Party Sit & Go has exceeded €1.5 million!

The prize pool will be shared by three punters in total, one NordicBet and two Coolbet players. They participated in the 3-seater tournament with a €10 buy-in.

More to Come, That's for Sure

Since the game was launched, it has awarded a jackpot 30 times, while this was the third one won this year. Last year, the jackpot was hit 14 times, with the biggest one reaching nearly €320,000.

Commenting on this remarkable feat, ‘miika295’ Coolbet player said he had played quite a few Fish Party Sit & Gos in the last few months and pointed out he was very happy for winning this staggering prize.

Alex Scott, Managing Director of Poker at Microgaming, congratulated to the three winners and stated this was another amazing win on the company's Fish Party progressive jackpot that had taken total payouts to more than €1.5 million!