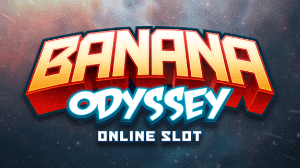 The leading online slot developer Microgaming has recently expanded its offering of games with a brand-new release that promises plenty of excitement and even more chances to hit big prizes.

Titled Banana Odyssey, the newly-launched space adventure will see players join two lovable astro chimps Buck and Chip as they travel across the galaxy to uncover the hidden riches of the Banana Planet.

Discover the Riches of the Banana Planet

Developed exclusively for Microgaming by Slingshot Studios – the gaming studio behind such popular titles as Zombie Hoard and Cash of Kingdoms – Banana Odyssey features a standard 5-reel 3-row layout, along with a total of 10 paylines.

To make the whole experience more exciting, the game has several thrilling features on offer, including the Free Spins round, expanding Wild and respins. The game also pays both ways – from left to right and from right to left.

With astro chimps leading the way, players will embark on an intergalactic adventure of epic proportions. The way to handsome prizes will be open once the Wild symbol lands on one of the three middle reels, where it will expand to cover the entire reel, activating the Cosmic respin feature. Upon triggering this feature, the expanded Wild symbols will stay locked in its position while the rest of the reels respins. If any extra Wild lands, it will trigger additional respins, giving players the chance to scoop hefty prizes.

A Valuable Addition to the Offering

The Free Spins round will launch players into hyperspace. To unlock this feature, simply land 3 Scatter symbols on the middle three reels and you'll get 10 spins to start the round with. Locked expanding Wilds further improve the feature's win potential.

Commenting on the launch of the new game, James Buchanan, Director of Global Operations at Microgaming said his company always strived to deliver a diverse, quality content portfolio to meet the needs of its operators, and Banana Odyssey was a testament to this.

Buchanan added that the game was now available to Microgaming's wider customer base following a two-month exclusivity period. He also pointed out that Slingshot Studios had done a tremendous job creating an energetic, fast-paced slot, successfully combining popular game mechanics of respins, expanding wilds and free spins, making Banana Odyssey a captivating new addition to their library of games.

Play Banana Odyssey at any online casino powered by the Isle of Man-based developer.