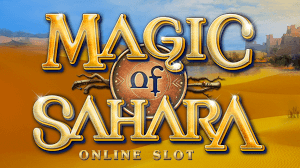 Microgaming has recently launched a brand-new game that promises to take players on an epic adventure set in the world's largest desert.

Titled Magic of Sahara, this exciting new release brings the heat of the Northern African desert to the reels and is developed exclusively for Microgaming by their partners at All41 Studios.

This is the second game the independent game studio launches for the renowned gaming company, following the successful launch of Le Kaffe Bar last month.

Get ready to traverse the mystic dunes of Sahara looking for an oasis of riches. Magic of Sahara is a 5-reel 3-row slot with 9 paylines bringing together fantastic visuals and immersive gameplay.

The game boasts stunning art and soundtrack, while its atmosphere further enhances the overall experience. Magic of Sahara is packed with exciting and potentially lucrative features, such as stacked Wilds, Free Spins and the Token Chain.

During the Main Game, players will be able to cast spells using super stacked Wild symbols, which can appear on reels 3 and 4 and lead to really magical prizes.

Plenty of Ways to Win

There are two different ways to activate the Free Spins round. Landing a symbol featuring the mysterious merchant will award players a collectible token. This token is added to the Token Chain, located above the grid. If players manage to collect 25 or more of these tokens, the feature will be activated with up to 34 free spins available.

The same can be done by landing a minimum of 3 Scatters.

Once the Free Spins round starts, players will get 5 additional spins, while all wins will be doubled and Wilds will be able to appear stacked on every reel while the feature is active.

Commenting on the new release, James Buchanan Director of Global Operations at Microgaming said Magic of Sahara brought the wonder of the desert sands to life in a truly immersive world, with the game’s excellent soundtrack and detailed artwork which dynamically transitioned between day and night cycles, creating a spellbinding atmosphere.

Buchanan further said Magic of Sahara delivered engrossing features in the form of the Token Chain collection mechanic and a highly rewarding free spins round, complete with the win boosting 2x multiplier.

Julia Saburova Head of All41 Studios added they were excited to take players on a mystical journey to experience the Magic of Sahara.

Magic of Sahara is waiting for you at online casinos powered by Microgaming.