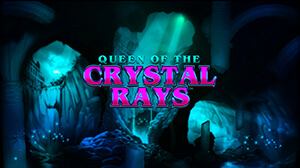 The leading online games developer Microgaming has recently added a brand-new slot to its offering of high-quality releases.

Developed exclusively for Microgaming by Crazy Tooth Studio, this fresh addition to the company's portfolio is titled Queen of the Crystal Rays and promises plenty of excitement and even more chances to scoop handsome prizes.

Get Ready to Have Fun

Queen of the Crystal Rays has a 6-reel 4-row layout, and features Any Adjacent Wins, offering players up to 50 paylines and awarding payouts going up to 2,500 the triggering wager.

The game is set deep in the caverns of an ancient temple, taking players to an immersive world of magic. The list of potentially lucrative features includes Wilds, Free Spins, the Crystal Ray feature, and the Queen Of The Crystal Rays Bonus round. Once the reels start spinning, you'll be swept off your feet by the game's stunning visuals and brightly-coloured symbols. Populating the grid are shiny gems, gilded artefacts, and the Queen herself!

The Crystal Ray feature will see the Queen randomly unleash her powers, which will cause the reels to expand. Once the crystal rays are initiated, the game dynamics will increase as the symbols will be able to turn into Wilds or 2multiipliers. This can lead to neat payouts.

Land at least three Scatters anywhere on the reels to trigger the Queen of the Crystal Rays bonus round. The round itself consists of four bonus rounds, filled with action and chances to win as the expanded reels get populated with prizes and crystal reflectors. Each of the bonus rounds will offer higher multiplier crystals!

Commenting on the launch of the new release, Ben Hoffman President at Crazy Tooth Studio said they couldn't wait for players to experience the magic of Queen Of The Crystal Ray, a game that combined an entrancing soundtrack and striking graphics to create an immersive mystic world.

He stated the captivating Queen character, colourful crystal ray blasts, and unique gameplay made for a magical gaming experience, and added they were looking forward to adding more exclusive games to Microgaming’s diverse and innovative collection in the near future.

James Buchanan, Director of Global Operations at Microgaming, said the new fantasy-filled title was sure to receive a warm reception, as players discovered an enchanted world immersed in colourful visuals and engaging features. Buchanan further said that Queen Of The Crystal Rays features built on the excitement, offering an expanded reel set with crystal rays populating wilds and multipliers along their path, and offering players a rewarding adventure.

Play Queen Of The Crystal Rays at any Microgaming-powered online casino.