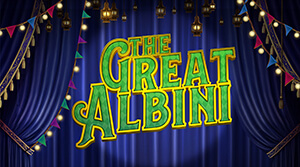 Embark on a journey filled with magic, illusions and potentially lucrative features.

Microgaming has announced it has added The Great Albini to its line-up of video slot games.

Developed by Foxium, the new release is a 5-reel 3-row game with 25 paylines that will see players embark on a journey filled with magic, illusions and potentially lucrative features.

A Game Filled with Excitement

Players can look forward to such features as Wilds, wild reels, Free Spins and Mystery Box Respins, which in combination with vintage-styled visuals offer a dazzling gaming experience.

The reels are populated with symbols such as playing cards, a thimble, yellow canary, target board and The Great Albini himself, along with his beautiful assistant Lilly. The whole experience is rounded up by a dynamic soundtrack.

The first on the list of features is the Mystery Box Respin, which is activated when a stack of 3 Mystery Box symbols appear on the centre reel during the Main Game. The symbols remain locked until the feature ends, while player will have 3 respins in total to try to get another Mystery Box on the grid, which will reset the number of respins. Run out of respins, or fill the entire grid with Mystery Box icons and the round will be over.

Neat Prizes up for Grabs

If you manage to get a giant 3×3 Free Spins symbol across the three middle reels, you'll see the Great Albini transforming the grid into a 5×6 layout, while the number of paylines will double. His lovely assistant Lily will join the show, awarding 12 spins. While the feature is active, the Great Albini can make Lily randomly vanish, which will cause her to appear as a vertical Wild symbol, landing on 1 of the 3 middle reels. Apart from bringing a multiplier of 2x on all wins, the Lily feature can be retriggered.

Players will have the option of purchasing 8, 10, or 12 free spins with the Lily feature whenever they feel like it.

Commenting on the launch of this game, David Reynolds Games Publisher at Microgaming, said The Great Albini was a glittering mix of gratifying gameplay, stunningly realised visuals and a stirring soundtrack, where players could win a staggering 4,000x their bet.

He added that the addition of the Bonus Box by Foxium alongside the superb respin and potentially very rewarding free spin features made for exciting player experience.

Find The Great Albini at any of online casinos powered by Microgaming.