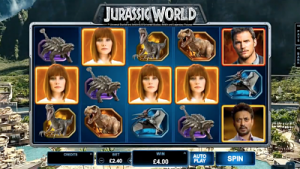 The title was to be a sequel to the game released in 2014, and as you might have guessed, it was inspired by the 2015 movie, and the fourth installment of the Jurassic Park series. Produced together with Universal Pictures, it was announced the video slot would feature characters and creatures from the movie.

Dinosaurs Are Coming Back

Now, Jurassic World slot has finally gone online and is available at Microgaming-powered casinos. The players can enjoy the game on the go, since the slot is available across all platforms.

Microgaming is bringing an action-packed title, with top notch graphics and high quality animations, with plenty of chances to win rewarding payouts. The five-reel three-row title has 243 different ways of winning, which will definitely be appealing to players, especially those looking to bring home hefty wins.

Jurassic World slot is a combination of popular features from the original game and new bonus rounds. The game logo is the Wild and can appear stacked on the reels. One of the more lucrative game's features, is triggered by the Indominus Rex, a symbol that will appear randomly on the reels, offering the chance to win 1000 times the stake.

Game's Scatters award free spins, while the players can choose the feature they want to play.

Choosing the Gyrosphere Valley awards 10 complimentary spins, with a hefty win up to seven times the wager waiting those lucky enough. On the other hand, the Creation Lab will also reward you with 10 free spin, but with a twist in the form of Rolling Reels.

Symbols forming winning combinations get replaced with new ones, which means some hefty winnings are at hand. Raptor Den bring the usual 10 spins, accompanied by scattered Wilds and the chance to win additional 15 spins.

Whether you're a fan of Jurassic Park franchise or not, be sure to check this title out since it can definitely make it worth your while.