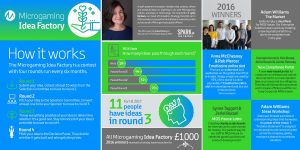 Microgaming Idea Factory has been a huge success.

But the innovative approach doesn't stop at simply finding new ideas, but also collects them and further improves and builds upon them.

The first-ever Microgaming Idea Factory contest was held throughout 2016, in MGS House, the company's headquarters in Douglas, thee capital and the largest town of the Isle of Man. The contest itself consists of four rounds in total, while the Decision Panel, composed of senior company staff, has the final word on whether a certain idea should be realized.

Lydia Barbara, Head of Innovation Strategy at Microgaming said the people behind the Idea Factory had been a bit nervous at first, because they had feared there wouldn't be enough ideas. She added the whole process of selecting and filtering ideas had been a thrilling experience and commended all who had taken part in it.

The total of five ideas successfully passed the selection process in 2016, and are currently being implemented or awaiting implementation:

The Concept that Sparked the Change

The Microgaming initiative has received recognition for its unique approach and for the fact it is powered by the staff themselves. The company's efforts have been acknowledged by Spark the Change movement, which awarded the Idea Factory with the Spark Award, celebrating those who implement innovative ways of working together.

Spark the Change has a somewhat unusual goal – to help create happier workplaces by exploring the means of bringing together everyone in the organization to work together. The idea is to achieve a lasting and total change to the way the business is being run.

Helen Walton, co-founder of Spark the Change said the judges had unanimously voted for  Microgaming Idea Factory, since the concept offered a unique and practical approach in dealing with the problems that most organization had.

Microgaming announced the Idea Factory would be expanded to two additional offices during this year.