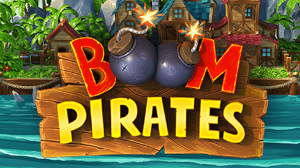 The award-winning developer of online gaming content Microgaming has recently expanded its lineup of games with a brand-new slot created by their partners at Foxium.

Titled Boom Pirates, the fresh release will see players join Captain Mary and her band of pirates as they sail the seven seas in search of treasures.

Microgaming's latest addition to the company's portfolio boasts superb graphics and top-notch animations, while the overall gaming experience is further boosted thanks to the new Wonderways and Foxify features.

Featuring a five-reel four-row layout, Boom Pirates becomes even more exciting when the feature powered by the Wonderways game mechanics is triggered: the grid will change its layout into 9×6, offering punters a staggering 10 million ways to grab a win!

Activating the Foxify feature boost players' chances of snatching big prizes, while raising the initial bet by 50% will add more gunpowder to the pirates' cannons, significantly improving the chances of creating a grid explosion.

Be on a lookout for the fearless leader of the pirates, as Captain Mary randomly makes her appearance on the reels, turning spins without a win into winning combinations of five matching symbols.

Purchase Free Spins If You Wish

The Yo-Ho-Ho Scatter symbols can only appear on reels 1, 3, and 5, and whenever they simultaneously land on these reels, they'll unlock the game's Free Spins round, sending players on a thrilling quest to find hidden treasures. Once activated, Wonderways can stay open until the Free Spins round comes to an end, leading to more Scatters being added to the count.

Players can also choose to buy free spins whenever they feel like it, for a price of 100 times the original bet.

Commenting on the release of the new game, James Buchanan, Director of Global Operations at Microgaming said the new launch was full to the brim with thrilling features, new mechanics and a soundtrack of sea shanties not to be missed.

Ake Andre, Chief Executive Officer at Foxium, added Boom Pirates was set to be an explosive success and marked the maiden voyage of their new Foxify and Wonderways technologies, which they believed would transform the player experience and enable the company's creative teams to take game development to the next level.