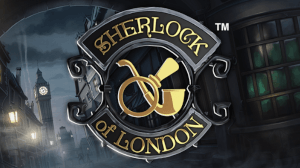 Microgaming Brings Sherlock on the Reels in the New Video Slot

The Isle of Man-based producer of online casino content Microgaming has announced the arrival of the company's latest release.

Titled Sherlock of London, this fresh addition to the developer's portfolio of video slots promises to take players on an adventure of epic proportions.

Get Ready for a Load of Excitement

As the game's title may have hinted, the game's main protagonist is the famous detective from 221B Baker Street, Sherlock Holmes, who'll be fighting crime along with his trusty companion Dr. Watson.

Sherlock of London has been developed exclusively for Microgaming by Rabcat, the game studio behind such popular titles as Castle Builder II and Crystal Rift. The game features a standard 5-reel 3-row layout with 25 paylines.

Punters will be taken to the busy Victorian metropolis, where the daring duo fights crime with the help of exciting features like connecting Wilds, double wins and bonus spins, which can prove to be extremely lucrative.

Sherlock appears on the reels, serving as the Wild symbol during the Main Game, and at the same time offering a variety of ways to claim huge awards.

Land more than one Wild on the reels and the symbols will be connected together, transforming all other icons on the path. If two Wilds appear one next to the other, they will merge to trigger the double win feature.

Activating this feature will double all line wins from that spin. But that's not all, as landing a single Wild on the first or second reel can award players up to two bonus spins. While the feature is active, the triggering Wilds will stay fixed on the grid, while all the others will respin.

Sherlock and Dr. Watson make their appearance as expanding Wilds and extra Wilds during the Free Spins round, which can lead to neat payouts. Three or more Scatters activate the feature, while players receive 10 spins. Landing additional three Scatters will retrigger the round, with extra 10 spins added to the count.

Sherlock of London can be played at any online casino powered by Microgaming.

James Buchanan Director of Global Operations at Microgaming said Sherlock of London provided a slot experience with wild features that heightened the action in both the base game and free spins. He pointed out that the mysterious atmosphere and thrilling adventures were well represented here, with excellent artwork and an evocative soundtrack.