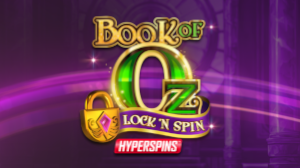 After the success of its Book of Oz slot, which was released in December last year, Microgaming has launched the sequel to this game.

Developed exclusively for the Isle of Man-based developer by Triple Edge Studios, the new launch promises even more excitement and chances to scoop huge prizes.

Titled Book of Oz Lock ‘N Spin, the latest chapter in this series features a standard 5-reel 3-row layout with 10 paylines, while high rollers will be delighted to hear that the newly-launched game offers high volatility – meaning payout won't be frequent but will be worth waiting for. To help punters win, the slot has a number of potentially lucrative features on offer, including the Hyperspins Lock ‘N Spin and 2nd Chance features.

The Hyperspins Lock ‘N Spin feature is available in the Main Game and allows players to lock up to 4 reels and then respin to try to complete additional winning combinations, or even activate the Free Spins round. Players can also make the most out of the game's Book Scatter symbol, which can lead to handsome payouts.

The Book symbol serves as both the Wild and the Scatter symbol. Landing at least 3 of a kind will trigger the Free Spins round, rewarding 10, 12, or 25 spins – depending on the number of the symbol used to activate the feature. During this feature, a special symbol will unleash its powers, significantly boosting the game's win potential.

An Exciting Free Spins Round

Once the Free Spins round starts, the 2nd Chance feature will give players the chance to keep the original symbol or reshuffle. The ultimate goal of this is to upgrade the special expanding symbol, which can increase the win potential to 5,000 times the original wager. Landing addition 3 or more
Scatters will add more spins to the count.

Commenting on the launch of the new game, James Buchanan Director of Global Operations at Microgaming pointed out that Triple Edge Studios have successfully created an enchanting sequel to the original game.

Book of Oz Lock ‘N Spin is waiting for you at any Microgaming-powered online casino.