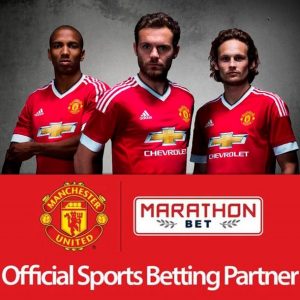 It had to be Manchester United.

One of the most-recognised sports brand and arguably the biggest soccer (or football as it is called in UK) has become the first club in the sport to launch a branded online casino.

MUFC casino will offer live roulette, blackjack and other popular online casino games immersed in a club-themed environment that is bound to be a huge appeal for Manchester United fans worldwide.

Manchester United is reported to boast a huge fan base consisting of 659 million supporters across the globe, which makes for one in ten of the entire global population.

“Our commercial partners play an important role in helping us find new ways to engage with our global following of 659 million fans, new ways in which we can celebrate with them the unique passion for Manchester United.”

“Our global partner Marathonbet has certainly created some great content and experiences for our fans, both online and on matchdays at Old Trafford.”, Richard Arnold, Manchester United’s group managing director was quoted saying at the casino opening.

Marathonbet representative was equally enthusiastic over the brand new step in the business relationship between the two sides.

“Our aim is to offer an immersive environment where players can enjoy online live roulette while having the feel of being part of Manchester United,” said Marathonbet’s head of gaming R&D Christian Melin.

In a step which will have elevated the world’s biggest regulated sports betting market of United Kingdom to new heights, the opening of the soccer branded online casino is likely to cause plenty of scrutiny in a country already alarmed at the amount of gambling advertising linked to its sporting events.

UK government has been attempting to raise the awareness of the growing issue and it is reported that all gambling advertising on TV and social media before the 9pm mark could be banned amidst fears that TV soccer games are normalizing gambling to children.