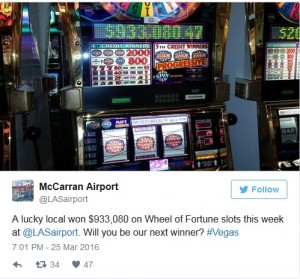 You are waiting for your flight.

You choose to pass the time inside the airport’s casino.

All of the sudden you hit a jackpot on a slot machine worth almost a million dollars!

What would you do?

One such big money jackpot was hit on Friday inside McCarran Airport in Las Vegas, according to reports from Las Vegas Sun.

The Las Vegas airport has confirmed the news on Twitter by posting a photo of the win in excess of $933,080 that was hit on a Wheel of Fortune slot machine.

A lucky local won $933,080 on Wheel of Fortune slots this week at @LASairport. Will you be our next winner? #Vegas pic.twitter.com/MzvXNyNSQd

McCarran airport did not identify the lucky local who is believed to be a female.

The Las Vegas airport is one of rare US aviation hubs that offers gaming inside its terminals. McCarran airport boasts more than 1,300 gaming machines situated inside the airport.