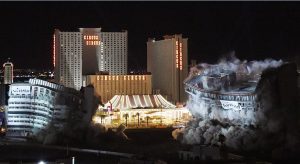 It hosted headliners and celebrities for 60 years before its closure in May 2015, but Tuesday night brought a definite end for one of Las Vegas’ landmarks –Riviera Hotel and Casino.

The likes of Liberace and Dean Martin were considered regular visitors of this famed resort, which was also a backdrop for blockbuster movies such as the Rat Pack original Ocean’s 11 in 1960, James Bond film Diamonds are Forever and the latest Jason Bourne movies.

The 2,075-room property’s last remaining tower was last night brought to rubble with a controlled explosion which happened around 2am.

Riviera’s Monte Carlo tower was the last standing building of the total 13 of them which were previously levelled to the ground.

Unlike the previous implosion in June, there was no designated viewing area this time, but a small crowd nevertheless gathered to witness the moment which sent the famed resort in history.

Considered the Chicago outfit’s crown jewel, the Riviera Hotel and Casino was once known as a classic mob joint since its very opening in 1955 with the organized crime outfits across the country having already sunk their teeth into the casinos in a takeover that had started the decade before.

Gambling profits were then used to pay for gang’s illegal activities including betting, drugs, prostitution and often even murder.

The Tourism Agency bought the entire 26 acres of the land for $182.5 million plus $8.5 million in related transaction costs.

The expansion of the Convention Centre is expected to be completed in January.