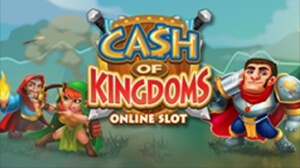 The Isle of Man-headquartered developer of online gaming content Microgaming has announced the latest addition to its extensive portfolio of high-quality video slots.

Titled Cash of Kingdoms, the fresh release has been developed by Slingshot Studios and will exclusively be available for Microgaming's operators.

The game had its premiere at this year's edition of ICE Totally Gaming in London, where we had the chance to see what was on offer. Featuring a 5-reel 3-row layout, Cash of Kingdoms offers a total of 15 paylines and a great variety of exciting and potentially rewarding features. Couple that with top-notch visuals and a dynamic gameplay, and you've got yourself a winner!

You'll instantly notice the game's medieval theme, with five brave warriors as the main characters – Knight, Mage, Rogue, Bombardier, and Archer – who are ready to give you an adventure of a lifetime.

When it comes to features on offer, the Invading Wilds will see reels turn Wild and it's available in both the main game and the Free Spins round. If a full stack of Wilds finds its place on reel 2 or 4, the adjacent reels will also turn Wild, but if a stack of Wilds lands on both reels 2 and 4, the middle one will turn Wild.

Make the Most out of Its Features

The good news about this feature is the fact players will always get paid when it gets activated, since the game pays both ways.

The Free Spins round brings even more excitement. This feature is activated whenever three Scatters find their place on the reels. Once it's on, it's possible to turn a whole reel wild and get a neat 2x multiplier. Any Scatters that land during the round will award an additional spin, giving players more chances to score huge wins.

David Reynolds, Games Publisher at Microgaming said the company had been anticipating the release of Cash of Kingdoms ever since ICE Totally Gaming.

He added the game was built with strong and regular features, which were amplified by paying both ways and pointed out the game delivered plenty of on-screen action on any device, together with a popular theme that is sure to make it a player favourite.