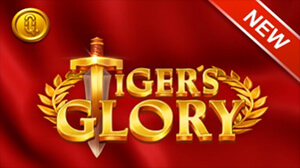 Engage in a battle of epic proportions and win prizes that can go up to 12,000x the triggering bet.

The leading producer of online casino content Quickspin has recently added a new action-packed video slot to its portfolio of games.

Titled Tiger's Glory, the new release will take players to the Coliseum of Rome, where they'll engage in a battle of epic proportions, and win prizes that can go up to 12,000x the triggering bet during one of the game's special features.

May the Best Gladiator Win

First of all, Tiger's Glory is a six-reel four-row slot, which offers no traditional paylines, but instead has 4,096 different ways to win. Winning combinations are formed by matching symbol from left to right, in any place on reels whatsoever.

The beautifully designed reels are set against the Coliseum, while the game's soundtrack further enhances the overall playing experience.

When it comes to symbols populating the reels, you'll encounter the usual set of playing cards, but also four brave gladiators that help form high paying winning combinations. The game's highest-paying symbols it the tiger, with six of a kind awarding a payout worth 10 times the wager.

The Wild is represented by a golden wreath of laurels, and although this icon is not especially worth on its own, it can prove to be very lucrative as it can substitute for all other symbols, except the Scatter.

Land a minimum of three Scatters to activate the Tiger Battle free spins round, while depending on the number of bonus symbols used to activate this feature, you can get up to 20 spins.

While the Free Spins round is on, the Enraged Tiger will be added to the symbols appearing on the reels, and it will award a payout in any position it lands. It will also add an additional spin when it defeats a gladiator. We should also mention all Enraged Tiger symbols remain locked in place for the duration of the feature.

Commenting on Quickspin's latest release, the developer's Chief Executive Officer, Daniel Lindberg, said the company was delighted to unveil its latest slot, Tiger’s Glory, and added the game's immersive setting and pulsating gameplay would make it one of its most engaging titles to date.

Tiger's Glory can be played at any of Quickspin-powered online casinos, with betting starting from just $0.20 per spin.