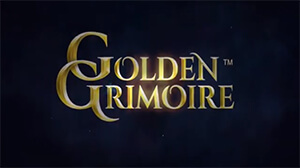 Golden Grimoire is a low to medium variance game.

The leading developer of online casino games, NetEnt, has recently launched a brand-new game that is sure to become a valuable addition to the company's line-up of slots.

On the reels, players will encounter icons such as playing cards, skulls, spiders, and spell books, while players are sure to benefit from the stacked symbols appearing on the grid, as they have the potential to award multiple winning combinations in a single spin.

When it comes to features on offer, the list includes Wilds, Scatters, Free Spins as well as Mystery Symbols. Golden Grimoire is a low to medium variance game, so expect smaller but more frequent payouts. The biggest prize available is worth 200x the wager, which means that with the right wager, a lucky player can grab a win worth a staggering $80,000!

Mystery Symbols will further boost the overall gaming experience. They appear on the reels 3, 4, and 5 as stacked symbols, randomly turning into one single symbol, and covering all positions, which can result in more than handsome payouts.

Plenty of Ways to Win

Wild symbols also appear along with Mystery icons, which can lead to stacked Wilds appearing all over the grid, awarding the aforementioned prize of $80,000 in combination with the right stake. But there's more, as landing a minimum of three Scatter symbols activate the game's Free Spins round. By doing so, players get 8 spins, while Mystery symbols will be able to appear on the reel 2 as well, with the possibility of becoming sticky when they land.

Commenting on the arrival of the developer's latest title, Bryan Upton, Director of Games at NetEnt, said Golden Grimoire opened the portal to another world full of ancient magic and mystery where anything could happen.

Upton stated the game built suspense with every spin and pointed out that if there was one thing players should expect, it was the unexpected!