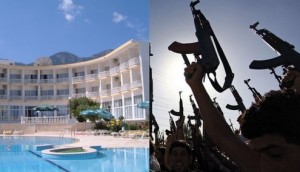 Dressed in dark clothes, with masks on their heads and toy firearms in their hands, hotel staff charged the restaurant in a fake jihadist attack in order to promote a new casino in the hotel, but their stunt backfired immediately with panicked diners and hotel visitors lasting the resort.

Visitors of the hotel were left terrified after the stunt, seriously considering choosing other destinations in the future as the entire farce did more damage than good to this Paphos-based hotel.

“Totally disgusted, could have given someone a heart attack”, a 66-year-old Bernard Heald told The Sun.

Having left their guests in utter fear and having ruined their reputation with guests already cancelling their arrangements and choosing different resorts, First Choice hotel even took it to their website to brag about the stunt claiming that hotel offers “exciting and diverse range of shows, fun and activities”.

The travel firm First Choice however quickly apologised for the wrong choice of “entertainment programme”.

“This account of events is concerning to hear and we would like to apologise to guests who were present. First Choice can confirm that changes have been made to our entertainment programme with immediate effect and guidelines have been re-issued to our resort teams”, a hotel’s spokeperson was quoted.

The latest bad joke from the First Choice hotel is not the first time tourists have been petrified by staged terror attacks on their holidays.

A group of men in Turkey pulled off a similar stunt last year when they performed a fake gunned attack on the pool at the five-star Grand Yazici Mares hotel. In addition, the Club Hotel Pineta in Marmaris, Turkey, staged a similar “show” when a male worker came to a pool wearing a black hood, mask and robes with his colleagues watching in amusement.