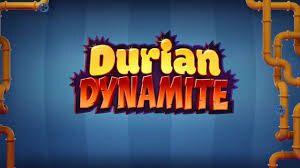 Quickspin has recently added a new game to its lineup of video slots. The game is called Durian Dynamite, it has five reels, three rows, a total of 20 paylines, and promises plenty of excitement and even more chances to hit big prizes.

There are plenty of features to help players do this including Dynamite Wilds, Regular Wilds, Dynamite Reels and Dynamite Supply features – which can lead to more handsome payouts.

In the Dynamite Wild features, punters will have the chance to fire the Wilds of the same name onto the reels, which can generate multiple Wilds on the grid. If two Dynamite Wilds collide, an explosion will happen, splitting each of them into 2 new wild apiece. The newly formed Wilds will reposition on the screen. Bear in mind that multiple explosions can happen, further dividing the Wilds.

Whenever three or more Scatter symbols land anywhere on the grid, the game’s Free Spins feature will be activated. Players will start the round with 6 spins at their disposal, but that number can be increased by landing additional Scatter symbols. Dynamite Wilds can be won during the Main Game, while extra Dynamite Reels can be obtained during the bonus round.

This is a very innovative slot game. Apart from the top-notch 3D graphics, it brings plenty of other thrilling functionalities, such as the Bonus Picker. This brings a whole new level of excitement as it awards players with Random Free Spin Upgrades. Players can get a random number of upgrades, such as Dynamite Reels, Durian Ammo, and Free Spins.

Commenting on the launch of the game, Erik Gullstrand, leading Chief Product Officer at Quickspin, said Durian Dynamite was guaranteed to give players a thrilling gaming experience!

He explained the Bonus Picker was a feature that had proved to be extremely popular in the company’s hit game Eastern Emeralds, which had been nominated for an EGR ‘Game of the Year Award’ last year, and pointed out the feature used in Durian Dynamite was slightly different, but as equally entertaining.

You can check this game out at Quickspin-powered online casinos.