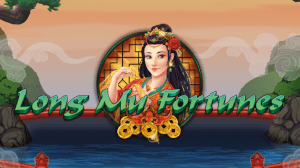 The award-winning developer of online slot games, Microgaming, has recently expanded its offering of high-quality casino content by launching a new Chinese-themed release.

The Myth Comes to Life

Long Mu Fortunes brings an ancient Chinese myth to life, combining traditional graphics and high-variance gameplay to offer players an unforgettable gaming experience. The slot features a standard five-by-three layout, along with a total of 10 paylines.

Once the reels start spinning, punters will be taken to the Far East, where they’ll have a chance to unearth the hidden riches of this Chinese deity. The game brings Long Mu’s fearsome dragons to life thanks to Red Dragon Wilds, which will also turn into stacked Wilds whenever they find their place on reels 2 or 4. But that’s not all, as they’ll also lock into position and award a respin.

While the Respin feature is active, the Nudging Multiplier Wild stacks will boost the players’ winning by awarding multipliers of up to 3x. Form a winning combination during this feature, and an extra respin will be added to the count.

Each Red Dragon symbol landing on reels 2 or 4 will add coins to a treasure pot placed above the grid. These coins can activate the coveted Jackpot feature, which starts when all respins have been completed. Players can look forward to two staggering prizes worth 100 and 5,000 times the original stage

An Exciting Free Spins Round

The game’s Free Spins round is triggered when 3 Scatter symbols land anywhere on the reels, awarding 10 spins, and offering players the chance to trigger respin or further boost their winnings by applying nudging multipliers of 3.

Commenting on the launch of the new game, James Buchanan Director of Global Operations at Microgaming said Fortune Factory Studios had delivered an enchanting slot exclusive to Microgaming, complete with lavish visuals and a mystical soundtrack.

He further said Long Mu Fortunes was a colourful, high-volatility slot packed with exciting features and added the addition of the Jackpot Feature and the Nudging Multiplier Wild stacks created an extremely satisfying gameplay experience with tremendous win potential.