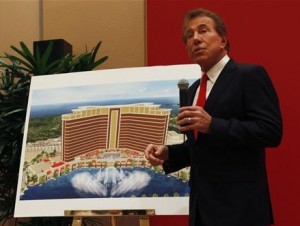 A Las Vegas casino magnate Steve Wynn is proposing an extravagant water paradise in water-deprived Nevada that would be anchored by a 38-acre, man-made lake built where an 18-hole golf course now sits in Las Vegas, the Associated Press has reported.

The current renderings show that golf course is planned to be halved into a nine-hole amenity, which would allow Wynn to have an additional artificial lake to build the new water resort around.

The water paradise is still in design phase and is yet to receive a final approval, but Steve Wynn has already announced that he is ready to “take advantage of imagination and fantasy” in order to turn the property his company Wynn Resorts owns into a water paradise and to do it for “zero dollars”.

Namely, Wynn Resorts owns the land and water rights on the property which got the sceptics questioning the project’s environmental claims, evaporation problems, drought and the unethical or unnatural use of water for the purpose of this new resort.

The Southern Nevada Water Authority estimates the golf course uses about 700 to 800 acre-feet of water per year and the new lake alone would use about 300 to 400 acre-feet per year.

However, Steve Wynn is assuring the public that the entire project will be “very green”.

“We’re going to do it with solar power, and we're going to use less water than on a golf course”, he said.

Wynn also claims that the park would be an amenity paid to by the resorts fee on hotel rooms at his Wynn and Encore properties, as well as a new 1,000-room hotel tower, while others would have to pay $20 or $30 entrance fee to enjoy the park.

Wynn and his associates argue that Paradise Park is not unethical because it is not expected to use more water than before, while Crystal Lagoons US Corp, the Miami-based company that will be in charge of building the lake claims that there will be evaporation controls set into place that will lower it by 40 to 60 percent, depending on the location.

The final plans of the project still need to be reviewed and approved by Wynn Resorts board of directors, likely in the fall when building of the water paradise could officially be sanctioned.