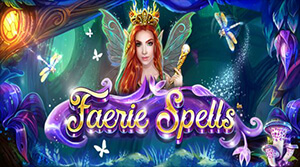 One of the well-established names in the online gaming industry Betsoft Gaming has launched the latest addition to the company's portfolio of video slots.

The release is titled Faerie Spell and promises to take players on a unique adventure set in the world of fairytales, but giving it a little twist to make the whole experience even more memorable.

The World of Fantasy Awaits

You'll meet the royal family of Faeries, living beneath the leaves and ruling the world of forest spirits, where powerful magic potions can fulfil one's wildest desires.

The game uses the developer's in-house built Trail System, while its probably most appealing feature is the Free Spins round it offers. But if that is not enough, Faerie Spells also has a potentially lucrative progressive jackpot available, which is a part of the company's progressive jackpot network.

Whenever 3 or more symbols featuring the mighty Faerie Queen appear on the reels, players will be taken to the royal laboratory filled with bottles, tubes, and vials, where they'll need to find the right ingredients. With up to 25 free spins waiting for in the Queen's workshop, players have the chance to make a recipe for one of the potions: Riches, Wealth, Luxury and Plenty.

As they give their best to make a potion, the size of the reward, also known as the jackpot, will grow thanks to players of other Betsoft games that make up the company's progressive jackpot network. With a bit of skill and a lot of luck, the final payout can be a staggering one.

A Game Unique in Many Ways

Commenting on the upcoming launch of this game, Annamaria Anastasi, Marketing Director for Betsoft, said Faerie Spells was a distinctive game in many ways.

She pointed out that Faerie Spells, unlike other fairytale slots, which were focused on the lighter side, this one was true to the original intent of these kinds of fables. Anastasi added the company had wanted to transport players to a world of darkness and mystery, immersing them in the superstitions and traditions that underpinned some of the richest traditional stories in every culture.

At the same time, she noted, Betsoft also had set out to solidify Betsoft’s position at the cutting edge of innovation in online gaming, with tiered, progressive jackpots shared between different titles, and a standard of artwork, audio, gameplay, and presentation that would continue to redefine slot gaming.