Battle of Giants: Extravagant Opening of Leeds Casino vs Champaign at Aspers 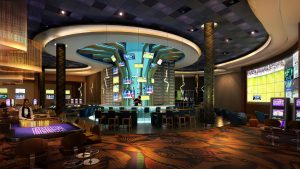 Victoria Gate Casino in Leeds opens its doors to the public (Image: www.Leeds-list.com)

Each player is important when entertainment industry takes the spotlight. Thursday will be remembered by the grand opening of a “large” Victoria Gate Casino, while on the other side, in south London to be precise, its biggest competitor called for the players and hit the jackpot with the little help of fancy bubbly on the table.

The “large” casino is on the third place by its size in the country and number one in north England and Scotland, and this luxurious opening of Victoria Gate Casino attracted many VIP quests and visitors for their Thursday’s £30m event organized by Global Gaming Ventures (GGV) in London.

If you thought this kind of event will host anyone, there you are definitely wrong. Cutting of the red ribbon ceremony and the first roulette wheels spinning were able to see only invited quests – to be more accurate 1,200 VIP visitors, while the gates of this new great casino were open to uninvited visitors curious to see their new gathering point at 9pm.

The importance of this opening was even more emphasized by GGV CEO Andrew Herd, calling the event “the pivotal moment for the city, which can now boast of having a stylish, buzzing entertainment hub in the heart of Leeds city center where everyone from first-time visitors and passers-by to top poker players are catered for”.

Not only that Leeds will have something to brag about, but the benefits of this casino will have its impact on the economy as well, according to the words of Leeds City Council deputy leader James Lewis, who also said that this place is “already proving itself to be a great success, attracting many visitors from a wide area”.

On the other hand, the Aspers Casino Westfield Stratford City has its own ways of attracting visitors. Bestowal of free booze is never a mistake, which was as well confirmed before, on the promotion of blackjack that turned out to be a jackpot.

Amazing £660 bottles of Armand de Brignac Ace of Spades Brut Gold champagne worth of £1m was awarded in the Aspers’ Ace of Spades promo that lasted from December 1 until January 15. The pricy gift was given to the players that have won a blackjack with the ace of spades and any other spade card worth 10 points.

This promotion was obviously worth it when Damian Aspinall, the chairman of Aspers, decided to play more, and threw on the table new Spinning for Gold promotion, where roulette players who hit certain numbers in certain sequences will be awarded with the bottle of the same expensive champagne of hip hop star Jay Z’s brand.

This promotion started on Thursday and will last until February 14.