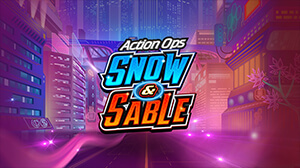 The game's two main characters are featured on the reels as Wild symbols.

Microgaming has announced the arrival of a new science-fiction-themed video slot to its portfolio.

Titled Action Ops: Snow & Sable, the new release has been exclusively developed for Microgaming and its operators by Triple Edge Studios.

Action Ops: Snow & Sable will take players to an epic adventure set in the future, in the city of Aurora, where they'll join the team of powerful cyber agents fighting against crime. Punters can look forward to an action-packed gaming experience, further enhanced by potentially lucrative features, such as Mixed Wild Pays, Stacked Wilds and Free Spins.

A minimum of three Scatters is required to trigger the game's Free Spins round awarding 10, 15 or 20 spins depending on the number of bonus symbols used to activate the feature.

Once this feature is activated, Snow and Sable will appear more often on the reels, even making reels 1 and 5 fully Wild on each and every spin.

On each spin, the game will choose a random character that will be assigned to reel 1 and 5, while getting the same one on each reel will increase your potential payout. Apart from offering bigger prizes, this puts the focus on the three middle reels, offering players the chance to hit five of a kind across a payline.

The Free Spins feature can be retriggered by landing additional 2 or 3 Scatter. This will award 5 or 10 more spins.

Reynolds added this high volatility game offered wins up to 1,000 times the initial bet with a potentially rewarding base game, complemented by a free spin experience that had a high theoretical average return and the ability to retrigger.

He pointed out Microgaming was looking forward to unveiling more action-packed content from Triple Edge Studios in the coming weeks.

Action Ops: Snow & Sable can be played at any of online casinos powered by the renowned developer.