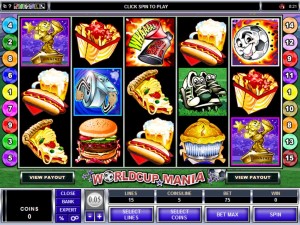 It will not have escaped your notice that June 2014 is the month when the World Cup final stages are scheduled to begin! All online casino software and game designers do also know this, and have been releasing over the last few years a range of slot games which boast a Football related theme!

In fact many of these companies have launched in the past couple of months a range of brand new slots all of which come with a Football related theme, and as is to be expected these slots are going be promoted to players as the World Cup final stages are in play.

If you are the type of slot player who enjoys taking advantage of little extras that are offered to you from any online casinos you play then look out for a huge number of bonuses and free spins which will be available to you during June!

Below we have put together some of the more playable World Cup and Football themed slot games, all of which you are going to be able to play at our listed casino sites.

The one game which is going to see a lot of action during June 2014 will be Microgaming’s aptly named World Cup Mania slot. Whilst this is not one of their more recent slot game releases, thanks to it being completely themed around the game of Football and the World Cup you will certainly get a lot of fun and enjoyment out of playing it online.

This slot has 15 optional paylines and can of course be set into play at stake levels of your own choosing. The slot can and very regularly will award two unique types of bonus feature rounds, the first being a set of free spins which can repeatedly re-trigger. The second bonus game is a penalty shoot out game, and when this game is triggered you are picking off locations on the bonus screen in the hope that some large cash amounts will be revealed to you based on which areas of the Football Pitch you pick.

You can play more than one coin per payline, however for each coin you do choose to place on each payline you stand to win a jackpot worth 7,500 coins, so by playing maximum bet spins a large 37,500 coin jackpot can be won when playing 5 coins per payline.

Playtech always know just what is required from a slot game to keep players using any casino site that has their suite of games available entertained, and one of their most recent slots to have been launched online is the Football Fans slot game.

This is a 20 payline slot, and what is slightly different in regards to how you play this slot is that before you set the reels into motion, you have to select one of the visible reel locations to become a potentially bonus paying location!

By selecting one reel position, if at the end of the next spin the location you picked has a Football Can reel symbol appearing on it then you instantly win a bonus payout of three times your total staked amount on that one spin!

You will also be able to trigger free spins when playing Playtech’s Football Fans slot game, and as soon as each individual free spin has been played off a penalty shot is taken and this will send one or more Wild symbols flying across the screen, and if they land on any reel position that location becomes completely wild, and that could see you picking up lots of additional winning combinations, if of course those wild symbols land in the right positions!

To enable you to tailor this slot you are also able to pick one of several different flags from teams competing in the World Cup, and the flag you pick will be superimposed on many of the reel symbols!

One other Football themed slot game that we just know is going to not only be heavily promoted throughout the World Cup 2014 festival but one that is going to have many special promotional offers attached to it by various casino sites is the relatively new Shoot slot from Microgaming.

You are going to be hard pressed to find a better World Cup themed slot game anywhere online than the Shoot slot game, and when you launch it you will find lots of the reel symbols are players who have taken part in one or more previous World Cup events!

This is a 50 payline slot so by playing maximum line spins you are going to have to have a fairly large bankroll at your disposal, but thanks to the unique way Microgaming have designed this slot, which includes a high payout percentages and a multi stage bonus game, the winnings are there for the taking!

The main bonus game feature round can see players winning a total of 619,000 coins, and when triggered a pick to win type of feature round is awarded. You need to pick off locations form that bonus game screen and could win all manner of cash prizes or you could be awarded a set of additional bonus games!

The base jackpot on Microgaming’s Shoot slot is going to award a winning payout of 7,500 coins which is based on you playing just one coin per line per spin.

The list above is in no way exhaustive, for there are dozens of different Football and World Cup themed slots on offer at all casino sites. However, those unique promotional offers that we can guarantee are going to be showered upon you during the World Cup are going to enable you to lock in a lot of playing value.

So keep your eyes peeled for them in either the casino lobby at the sites you regularly play at or via email, as a lot of casinos will be offering their customers bonuses via email throughout June!