Which Video Poker games have the most winning combinations? 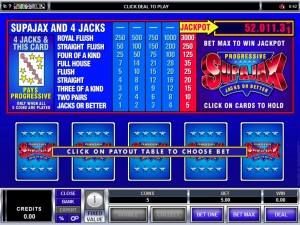 There are several Video Poker games on which you will find one or more Wild Cards in play, some of the wild cards can be Jokers and some of them can be the 2 valued cards. Games offering wild cards do tend to have lots of additional winning hand combinations listed on their respective pay tables and as such look out for games such as the Deuces and Joker game which has five wild cards in play four 2 cards and a Joker card, when playing this game you will find there are 11 different winning hand combinations listed on the pay table.

The Double Joker variant has not one but two wild Joker cards in its deck and there are 10 different winning hand combinations that you can form when playing this game online. Another hugely popular wild card Video Poker game is the Deuces Wild game, and when playing it the 2 cards are all wild and you will find a total of 10 winning hand combinations listed on its pay table.

One final game you may be interested in playing is the Joker poker video poker game this game has one single Wild Joker in the deck and there are 11 possible winning hand combinations listed on its pay table, this variant has a jackpot worth some 5000 coins when you play with 5 coins activated and in play.

There are also plenty of fairly standard Video Poker game variants which boast no type of Wild cards in their decks and when playing these games you will find three are several unique and often enhanced hand combinations that can be formed and dealt out to you when playing some of them.

A few other variants that you may be interested in playing include the Aces and Eights variant on which there are 11 possible winning hand combinations, there are also two progressive Video Poker game you may enjoy playing however both of them have fixed coin values and you need to place maximum bets to have any chance of winning their respective jackpots.

Always be prepared to play different Video Poker games than the ones you may usually play, for when you take a look at the many different variants that are available online, and more importantly study closely the pay tables on some variants you will come across some games which boast higher than average long term payout percentages.

One game that is sure to get any online poker player excited is the All Aces Video Poker game which is found in Microgaming casino sites, for thanks to the pay tables attached to this game it is currently the highest paying variant available and if you play it optimally you will be playing variant offering a payout percentage of a truly enormous 99.92%.