Which Slots Have the Most Bonus Rounds? 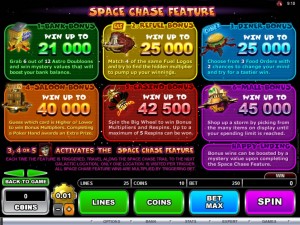 You may be searching for a range of online slot games that are going to give you a much more entertaining type of playing experience, and probably the best slot games to look for are those offering you the chance of triggering a multitude of different types of bonus games instead of the usual one or two of them that most video slots offer.

With this in mind we have compiled another of our in-depth and informative slot playing guides below which is going to introduce you to several slot games that you may never have played before, and each of them offer lots of different bonus games which can be triggered as you play the base game.

More and more online casino sites are offering a range of Fruit Machines which are known as AWP’s which means Amusement with Prizes or Fruit Machines. These types of slot games are designed around those gaming machines found in the UK, and if you have never experienced playing these types of slots before and you are looking to play slots offering lots, and we do mean lots, of different bonus game feature rounds then these slots are well worth playing.

Fruit Machines have been designed to give players a much more entertaining type of gaming experience as this why they are often referred to officially as Amusement with Prizes machines, and the most commonly found ones will offer just one single payline and various different stake options, and these types of slot games also are structured as three reel slots.

You will find quiet a number of All Ways structured slot games come with an un-lockable range of bonus games, and you have to trigger the bonus games multiple times during your life time play on these types of slots to get to open up and unlock the different bonus game feature round options on offer.

If you are looking for such a slot game then there is a few offering such a playing structure such as the Thunderstruck II slot the Immortal Romance slot and also the Finer Reels of Life slot. You will have to play them for quite a while to get to unlock those additional bonus game feature rounds, but when you do then you will have plenty of ways to try and get a higher paying bonus game round being awarded to you!

The slots named above are the games on which you can play 243 ways to win per spin you play so you will find you will need to wager slightly higher than average amounts of cash to be able to play them but they should be within the financial reach of most players as the coin values are all fully adjustable by players.

Microgaming are one of the biggest designers and suppliers of both online and mobile casino games in the world, and as such it is going to be a good bet that they will have several slot games that are going to appeal to you!

One of their most bonus game packed slot games is their 25 payline Great Galaxy Grab Slot, and when you are playing the base game of this little beauty you are going to have the chance of triggering not one or two bonus games but up to eight of them, well there are seven different bonus feature games which can be triggered, and a rather cheeky additional feature known as the Happy Ending which can and will, when awarded, increase your winning payouts on several of these bonus features once you have finished playing them off!

This slot is a multi stake slot game, however as with the vast majority of video slot games on which a bonus game or bonus games can be trigger the more you wager on the base game the more you stand to win when and if the bonus feature rounds are awarded to you.

One of those many different bonus games which can be awarded to you is a free spins bonus feature round, and on that bonus game alone you can win up to 240,000 coins, so the winnings are there for the taking and being the one slot game from Microgaming offering the most bonus feature rounds then this is a slot your really ought to consider playing.

As always we would advise anyone who is considering playing slot games which they have never experienced playing before to give those games some play time via a free to play demo mode before jumping in with both feet and playing them for real money.