What is the Most Entertaining Slot Game Bonus Features 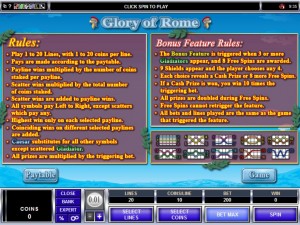 One of the most frequently asked questions regarding online bonus game awarding video slots is which one of the many thousands of them offers the most entertaining bonus feature round. As there are so many slots in this category and as there are even more players playing them it will of course be down to each player’s tastes and expectations as to which one is the best one in their opinion!

However, there are some video slot machines which for some reason a large proportion of players simply cannot resist playing, and as such below we have an overview of what these slot games are along with an overview of what the bonus features on each of them are, so you can make your own mind up on which is the best slot and the one you will probably enjoy playing over all others.

Some slots will have something known as a multi level type of bonus game, and when you trigger these kinds of bonus game the aim is to progress through each round where you will often find the bigger and better winning payouts can be won.

There are a number of these types of slots available at various different casinos using different gaming platforms, one worth playing when you are playing at a NetEnt powered casino site is the Mega Fortune slot, when the bonus game is awarded on this slot you play a multi level wheel spinning type of bonus game on which you could win one of several different progressive jackpots which become higher in value once you make it though each level.

The Cashanova slot from Microgaming has a couple of bonus games attached to it, one of them it a special barnyard based bonus pick to win round. By picking off locations on the first level of this bonus game you will cash amounts or could select a location which has a special Key symbols hiding behind it, when you reveal this symbol you will then progress through to another level on which you have to select a gift to present to the star of the slot Henrietta the Hen!

If she makes the right facial expression when presented with your gift you could win a large cash payout on this second stage bonus round, however if she turns her nose up at it you will be awarded with just a modest cash amount! This is certainly an entertaining bonus feature round and one that could award some very large winning payouts!

The most commonly found bonus games on slots from most slot designers and slot game providers are those on which you will trigger a set of free spins as soon as a required number of scatter symbols finally make an appearance anywhere in view on the base game screen.

The majority of these types of free spins awarding video slots will offer no real entertainment value when you trigger the bonus game as the free spins will usually simply start to play off once triggered and you will simply then have to sit back and watch them being played off, whilst hoping you spin in some high valued winning combinations on your activated pay lines.

There are several slots which have a tad more entertaining and exciting type of free spins bonus game feature attached to them and one of these is the Glory of Rome slot game which is one of Microgaming’s 20 payline video slots.

When playing this slot game by spinning in three of the Shield reel symbols will see you then having to initially play off a pick to win based bonus game which involves you selecting four of the nine on screen shields  by clicking onto them one at a time. As soon as this bonus game is awarded you are given eight free spins and each of those four shields you select could either award you a cash bonus payout or another 8 free spins.

This is a very entertaining bonus feature round, for the cash values you can reveal can be ten times the amount you wagered on the base game spin which triggered the feature round, or if you enjoy playing off large amounts of free spins, if you reveal all four lots of additional free spins during that pick to win bonus game you will end up playing off a total of forty of them, and all winning payouts are double during the free spins round!

There are some other slots such as the Thunderstruck II Slot which will give you different options in regards to how you get to play off your free spins round, but these options only become unlocked when you have triggered the free spins rounds several times, so whilst entertaining bonus games it can often take you quite a while to unlock each option!

Many players will at one time or another experience a huge paying bonus game feature when playing on particular online video slot game, and this is usually all it takes for those players to list that one slot as their favourite one.

However, as soon as you have won a large amount of cash on one slot game it can often then sway your judgement and you may find yourself not wanting to play any other slots. This could see you then experiencing many losing streaks on that one slot as the game balances out its payout percentage.

So be prepared to play a large range of different slot games when logged into an online casino and not just one or two of them that awarded you a large payout when you played them previously. You will always find a range of slots with a similar designed and structure and also several slots will share a similar type of bonus feature games, so hunt around and do be prepared to play several slots as by doing so you will discover plenty of different games which can and do award some large winning payouts!