Are True Skill Slot Games Bonus Rounds on the Way Out? 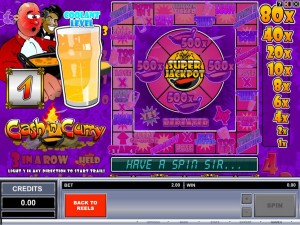 The most exciting aspect of the majority of online video slot games is of course when you finally manage to trigger and be awarded the bonus game that is attached to the slot you are playing, for you will never know just how much you are going to win until that bonus game has played out.

Similarly when you are playing slots on which you can win a set of free spins, many online slots always know before the very first free spin is set in motion just how much you are going to win during that game and for all intents and purposes the free spins bonus game is just eye candy!

This therefore means that if you are prepared to invest a little time and effort and give these true skill bonus game awarding slots some playtime, ideally at no risk via the free to play versions of the slots then you can master the way they work and when playing such a slot online and that true skill bonus game is awarded then you are guaranteed to be awarded the highest payout possible on that bonus game by playing the true skill round perfectly.

But over the last few years we have not seen any of these true skill bonus game awarding slots being designed and released which does beg the question whether they are on the way out! Sadly, it does look like none of the major online casino game suppliers are launching any of these types of slot games in the near future. However, you are still able to access and play their original slots which do offer such a bonus game feature.

The most commonly found slot games that offer a true skill based bonus round are the Fruit Machines, now many online casinos will have some of this category of slots available and these are high impact and fast paced slots which offer a much more entertainment based type of playing structure.

When playing Fruit Machines you can expect to get offered a huge number of bonus games which makes them fun games to play. However, the types of true skill bonus games which these slots can award you with can and do vary so lets us now run through some examples of these types of slot games and enlighten you on just what true skill bonus features and bonus rounds you will be getting access to when playing them online!

Skill Stop Feature –  When you are playing the Apocalypse Cow Fruit Machine and have triggered the main bonus game feature you could be awarded what is known as a Skill Stop feature, now this will see the word continue scrolling across the display and you are tasked with hitting the stop button when the letter E is highlighted, if so then you can continue playing the bonus round, but if you hit the stop button on any of the other letters that make up this word then your bonus game ends instantly.

As such you should practise playing this Skill Stop feature as much as you can, for with a bit of practice your should master it and then whenever it is awarded to you it will be a forgone conclusion that you will be able to continue playing the bonus game in the hope of amassing a large valued winning payout!

Reels Stop Feature – Quite a lot of Fruit Machines will award you with a bonus game on which the reels will all drop down at the same time and as each new combination drops onto the pay line you are tasked with hitting the stop button when a winning combination is displayed on it.

This can be a quite tricky true skill bonus game for you need to see the reels make one full revolution to enable you to spot what is the highest valued winning combination, and as you take longer and longer to hit the spin button the rate at which the reels drop down increases.

So when playing any such slot offering this type of bonus game once again you are best advised to master the art of playing it via a free play mode so you will have the necessary skills in place to enable you to stop the highest valued winning combination on the payline when it drops onto it!

Cash Trail – One final true skill bonus game feature is known as a Cash Trail bonus game, when triggered a series of cash amounts scroll across your screen and you are tasked with hitting the stop button when the highest valued ones are displayed, and once you hit that stop button all of the cash amounts displayed are awarded to you.

You do have to be quick though as when this bonus game is playing out the cash amounts will speed up and start to rapidly scroll across the screen however with a little practice you will soon master the art of this bonus game feature and pick up the best possible cash payouts!

It would appear the number of slots offering true skill bonus games are certainly in decline, however you will always find them on offer it may just take a little time to track down at which online casino sites they are still available at!