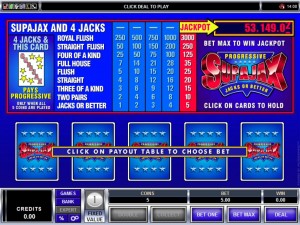 As you get more used to playing casino games online, you are more likely to be prepared to play some of the games you may not be familiar with, and as there are thousands of different casino games available in the online gaming environment we are happy to introduce you to some games which you may find very appealing.

If playing these types of games have sparked an interest in you then you do need to be aware that there is a certain way that you have to play each of them to be able to activate and put into play the progressive jackpot element of the game, and there will only be one way of forming the progressive jackpot paying winning hand combination.

As such we invite you to keep on reading for below we will introduce you to the three currently available Video Poker game variants that all have a progressive jackpot attached to them and we will also let you know where those games are available online.

If you do play with the maximum 5 coins in play which will of course cost you 5.00 in total stakes to play and that winning hand combination is dealt out to you then you are instantly awarded the progressive jackpot displayed on the jackpot meter and the jackpot will then reset to its seed value.

The Mega Jacks Video Poker game is a game on offer at Playtech Powered Online Casino Sites, and what makes this quite a unique type of Video Poker game is that its jackpot which is a progressive one can be won when you are playing it for any of the many different coin portions settings available, and as such gives Low Rolling Video Poker Players and also high rolling players the ability to choose a stake level at which they can afford to play this game for and will then give those players playing five card hands the chance of winning the progressive jackpot attached to this game.

The way in which the jackpot hand is formed and awarded is by you being dealt out the Royal Flush hand in any suit once you have placed a maximum 5 coins wager on the base game, that does however mean the progressive jackpot that this game offers does not tend to get as large as the ones attached to the above named game and the one named blew, but this variant is one all players should be able to afford to play and should get plenty of playing value out of playing.

Another Video Poker game offering players the chance of winning a progressive jackpot from Microgaming powered casinos is the Jackpot Deuces game. This game much like the Supajax game mentioned above boasts a 1.00 fixed coin playing structure and you have to play five of those coins to activate the jackpot payout on its pay table.

The way in which you can win the jackpot on this game which has the standard 52 cards in its deck is by being dealt the Royal Flush hand in the suit of Diamonds, it does matter in what order that Royal Flush hand is dealt out to you as long as you have the Ten, Jack, Queen, King and Ace card showing as you final hand in the suit of diamonds and you have played a 5.00 stake on the game then you will be awarded with the progressive jackpot payout.

If you are dealt out any of the other three possible Royal Flush hand combinations and you are playing with all five coins in play on that hand then you win the standard 4000 coin jackpot for that winning hand combination.

As you have just discovered playing Video Poker games online that offer you the chance of winning a progressive jackpot will require you do play them for certain stake levels and then to be dealt out the special winning hand combination as listed on the pay table of the game to win the progressive jackpot.

It may be the case that you cannot afford, based on the amount of cash you have in your gaming budget to play for those particular stake levels, and if that is the case then do have a look around at our other Video Poker game variant reviews, for by doing so you will find plenty of them that can be played for low stake amounts but still have a large jackpot on offer.