How do Online Pachinko Games Play and Pay? 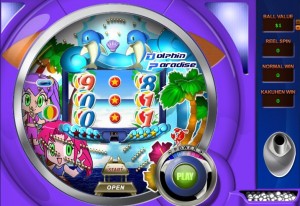 It is always quite exciting when you discover a range of casino games that you have never played or come across before, and if you are playing at some casino sites that are powered by software companies such as Playtech, then you will find a set of Asian Games tucked away in the games menu.

If you browse through these games you will come across a very unusual looking game which is the Pachinko game called the Dolphin Paradise Pachinko game, which looks like it is a cross between a Pinball machine and a Slot machine, and in fact that is exactly what it is!

If you want to play a game which can offer some large winning payouts, and one that is structured in a very unique way then this Pachinko game is certainly going to be well worth you testing out and playing, and below we have a guide to how this and all other Pachinko based games work and operate, so have a good read through it for this really is a very enjoyable game to play on which some large payouts are there for the taking!

Let us now give you an idea of how to play the Dolphin Paradise Pachinko game which is available to play at Playtech powered sites, be aware that most Pachinko games work in a similar way so if you do come across any of these types of games offered at different casinos sites then you should find a very similar if not identical playing structure to the one this games offers.

You need to be aware that the game plays much like a Pinball game in the first stage of the game, and each ball that you release will cost you one coin, and the coin values can all be adjusted from very low to modest values.

This ball is then going to work its ways down the face of the game and should it hit any of the pins and obstacles located at various positions on the game screen then the ball will bounce around much like a ball does on a Pinball game!

Be aware that another ball will be released after the first one has been released unless you click on the Stop button, and as you will be paying for each ball released and launched onto the Pachinko games screen you need to click on that stop button as soon as you have set as many balls as you want to go into live play!

How to Win Playing Pachinko

Located at the foot of the game screen you will notice a special ball well with the word Start written above it, the aim of the first stage of each game of Pachinko you play is for you to get a ball to land in that ball well, and when you do you will receive and instant winning payout, and then the second part of the game will start.

This second stage of the game of Pachinko will see the middle of the screen positioned set of slot game type reels spinning, and when they have spun and come to a complete stop if you have got two matching reel symbols, and the reel symbols for reference are all numbers, on any of the three available paylines then a third stage of the game will launch and load onto the screen!

This third stage of the game will see one of several different mini games playing out, and the aim of the mini game is to get awarded the missing number that will help you complete a winning combination of reel symbols on the second stage of the game, and it if does then you are awarded with up to 100 coins in total as your winning payout!

The slot game which is played out on stage two of the game is a three line slot. The three available paylines are the middle set of three symbols and also the diagonal paylines.

If you have set the game to fire out balls repeatedly and you get more than one ball landing in the Start labelled ball well then your second stage bonus games are saved up and accumulated and will be awarded repeatedly once every previous one has been played out.

This really is a great game to play when you fancy something of a change from the more commonly found casino slot games Playtech powered online casinos have available, and as it come with a large payout percentage then some quite large winning payouts are always a very real possibility when you are giving it some play time online.

As you can give this game as much free play as you like then why not do that soon to see if it is a game you fancy playing for real money in the very near future!

Much like any other casino game you are going to find available online, you really should give as many of the games on offer a try as you can. Whilst you may enjoy playing one category of game, you really will not know when Lady Luck is about to strike.

Being classed as an Asian Game it is often quite easy to overlook games such as Pachinko, so always browse through the games menu at the casino you are playing it for games such as this one may just catch your eye and you may find them enjoyable to play, and if everything goes well if you do decide to play it you could end up in profit!