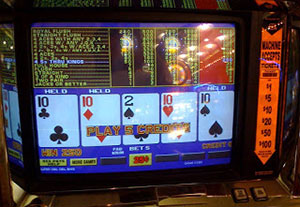 Keep on reading to find out some common misconceptions about Video Poker.

Similarly to other casino games, video poker players have created a number of myths spurred by their lack of understanding about the video poker and how it works. There are hundreds of different stories told by casino players about video poker, which mainly are generated because of the way they try to rationalize something they don’t understand.

If a player has had a lucky day, and the following day he’s had only bad streaks with the same video poker machine, he would attribute that to something illogical like not wearing his lucky shirt or that someone jinxed him. Anyway, here is a list of the most common video poker myths.

1. A Video Poker Machine Will Make Only One Big Payout

Myth: People tend to switch to another video poker machine if the one that they are playing has made a big payout, for example, a Royal Flush. The rationale behind this is that Royal Flush is a very rare payout, so if it has happened once, it won’t happen again in the near future.

Fact: This myth is very much wrong. A video poker machine makes payouts at random and the payouts are not based on some internal record of how many times specific payouts have been made. The chances for the same payout to occur are always the same: sometimes days may pass before the same payout has been made, other times it’s within a few moments.

Myth: This myth is similar to the first myth, only here video poker players look for a video poker machine that hasn’t made a big payout for a while, so they figure that it is bound to happen soon, hoping it would happen while they are playing.

Fact: There are so many things wrong with this myth too. People that don’t understand the Random Number Generator (RNG) technology tend to make up these myths. Anyway, in the past players hadn’t had the chance to access free information about gambling as we have today, but it’s still peculiar why these myths still exist.

3. The Bigger Your Bet, the Worst Your Cards

Myth: This myth exists since the 1990s, and was probably made up by people that were persistent to win something on a bad day even by increasing their bets to make for their losses. And after all the wasted wagers they probably started telling other players how the video poker machines are programmed to give bad cards with every maximum wager.

Fact: Yet another myth because of not knowing how the Random Number Generator produces outcomes, combined with being bad at video poker. All cards have the same probability of being dealt in a hand, and how much you wager won’t affect that fact.

Myth: Hardcore video poker players that are used to playing video poker machines at land-based casinos tend to have some disbelief regarding online video poker. We are not sure why that is, but it probably got do something with lack of trust towards the entire concept of online casinos and virtual gaming.

Fact: The truth actually is that online video poker games pay way more than land-based. This is because online casinos don’t have the same costs as land-based, and they can actually operate with lower costs so it’s easier for them to use that extra profit to provide more favorable games and playing conditions. Besides that, there is simply no reason to be doubtful about online casinos, they are regulated, licensed and frequently audited.

Myth: We can actually see the rationale behind this notion. It’s only normal for people to think that video poker machines where a jackpot is given for having four aces deal fewer aces. Why would the machine give the aces with the same frequency as other machines would when there is a jackpot?

As you can see the majority of the myths pertain to lack of understanding of how the Random Number Generator works. The RNG works independently of all the other functions in every video poker machine, so there is really no reason for making up such myths. Instead, learn how to play properly and play smart by adjusting your strategy to the paytable.