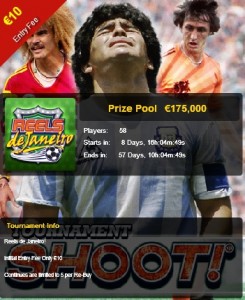 Following on from the hugely popular €100K Magnificent May slot tournament, Microgaming have decided to add another network wide slot tournament to their offering this June and as such you are going to be able to take your chances on their soon to be live Reels de Janeiro slot tournament.

This is going to be one of the biggest prize pool slot tournaments of the year to enter, for there is €175,000 up for grabs that has to be won!  The name Reels de Janeiro does of course imply it has some form of association or should we say celebration of the World Cup 2014 which is being held in Brazil, and having chosen one of their most popular Football themed slots as the tournament slot, that being the Shoot slot, if you enjoy playing slots and have a passion for Football then it is a slot tournament you should not miss out on!

You will find that all online casino sites that offer not only the Microgaming powered downloadable gaming platform but also the Microgaming networked slot tournaments are going to have this Reels de Janeiro tournament on offer.

The tourney goes live on Thursday the 12th of June at midnight (GMT +1) and it is live right through until Thursday the 21st of July a 22:00 (GMT +1). You can take your entry in the tournament at any time and with it being available for a number of weeks you should quite easily be able to find a spot in your slot playing diary to fit your entry in!

You could actually win a free entry into this Reels de Janeiro slot tournament for many Microgaming powered sites are holding Freeroll Satellite Tournaments at various time in the days ruining up to the tournament going live, so do keep your eyes peeled for them! As by entering one of the Freerolls and getting placed high up on the leader board will result in you getting a free ticket directly into the tournament therefore saving you from having to pay the entry fee!

As mentioned you could win a free entry into this Reels de Janeiro slot tournament via a Freeroll Satellite Tournament, however we do expect those cost free tournaments to be heavily subscribed, and should you not manage to win a free entry then you can of course opt to pay the direct entry fee.

The cost of a directly entry is €10, and regular slot tournament participants will notice that you are now charged to enter Microgaming’s slot tournaments in Euro’s instead of Dollars. If you hold an account at any casino offering this tournament and your casino account is in any other currency then you are still able to enter this one, as the software will instantly exchange your base currency into Euros and deduct the equivalent amount from your current casino account balance.

For that €10 entry fee you are going to be credited with 50,000 tournament coins and will have 15 minutes to try and amass as much as you can in winnings playing the tournament slot game, which for reference is the Shoot slot.

If you do not manage to accumulate a spectacular score once you have played off your initial entry you will be given the option of taking your entry again by purchasing a Rebuy. This option will cost you an additional €20 and your original score amassed on your previous entry will be wiped clean and you will get another 15 minutes of play time and an additional 50,000 in tournament coins to try and amass a much higher score.

Each entrant is allowed to take up to 500 Re-buys in total, so you will have plenty of chances of trying to amass a high enough initial score on this slot tournament!

You are also going to be able to carry on playing from the point where your initial entry has expired when taking part in this Reels de Janeiro slot tournament, for entrants can opt to purchase a Continue, and by doing so for an additional €10 your will be awarded an additional 30,000 in tournament coins and a further 15 minutes of play time.

There are a total of seventy five cash prizes to be won on this Reels de Janeiro slot tournament, and as is always the case with the huge paying tournaments, those players finishing in one of the higher positions on the leader board get the biggest share of the prize pool!

All those entrants who finish in places one to five are going to win €10,000 each, and entrants finishing in positions six to ten will also pick up a sizeable share of the prize pool as those entrants will each pick up a cash prize of €7,500.

There is a sliding scale of additional cash prizes up for grabs on this slot tournament and everyone finishing in any of the top 75 positions will each be awarded a cash prize, the lowest of which is €100 for everyone ending up in positions seventy to seventy five!

There is going to be a lot of interest in this slot tournament, more so with it having the popular 50 payline Shoot slot game as the tournament slot! This slot has plenty of bonus games and bonus features and when triggered if all goes well then you should be able to accumulate some sizeable winning payouts which will be converted into a score, and may just see you managing to finish in one of the prize paying positions.

Do try and take part in one of the up and coming Freeroll Tournaments that are available, as by doing so you can take your chance at no cost, and with some luck in running you could end up high up on the leader board and may be able to increase that score by taking one of the available Continue options.