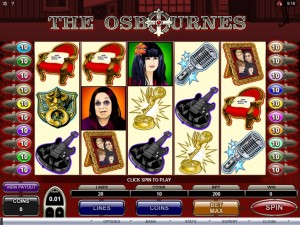 You may have noticed in the last couple of years more and more slot games appearing online which boast a theme based around a film, a famous person, a rock or pop band or even a board game, these slots are often known as branded slot and as such they always require a license from the trademark or copyright owner before those games can be developed and launched.

In today’s article we are going to have a look at some of the most popular licensed and fully branded online slot games from all of the major software and online slot game designers, and hopefully this will give you a few ideas of which slots you may wish to play when next logged into your favourite casino site.

It should be noted that there are a few pros and cons of a slot designer getting a license to bring out a fully branded slot, there have been occasions when a slot game has had to be withdrawn due to someone owning the copyright of the game taking offense at the slot or gambling in general.

However, many people are more than happy for slot games to be brought out and released based around a theme they have invented or even around themselves, take the Osbourne family which includes the rock legend that is Ozzy Osbourne and his TV talent show panellist famed wife Sharon, they were more than happy to see a slot game launched by Microgaming bearing images of themselves their son Jack and one of their daughters that being Kelly and even their pet dog!

Such slots based around famous celebrities are always going to keep those people in the public eye, even long after they die, for you only have to take a look in many land based casinos or online casino sites to see a range of Elvis themed slot games going strong!

We shall now guide you through a range of online slot games which may or may not appeal to you which all bear some form of theme which you will probably already be familiar with, these slot games are found at various different online casino sites and can be accessed for free or for real money.

Should any of the following slots take your fancy then do have a look around our website for we have many casino sites that not only offer these slot games but are also giving away lots of generous new player bonus offers which you should quite easily be able to use on these slots!

The Monopoly board game is one of the most popular games played the world over and much like there are many different variants of this board game available if you are interested in playing online slot games bearing the Monopoly theme then you are going to find plenty of them on offer.

It is IGT Interactive powered casino sites that you are going to find them available at and many of these monopoly slots have a special bonus game on which you get to make your way around the Monopoly board and pick up a range of cash prizes or bonus features as you do so!

Many television based talent and quiz shows now have slot games based and built around the theme of the shows, in fact you are going to find a large and expanding range of these types of slots for one of the biggest producers of online slot games, that being a company called Freemantle Media have an offshoot company who specialize in turning their most successful television shows into online slot games!

Some of their slot games which are live at many online casino sites include the Price is Right slot, the X Factor slot and the Hole in the Wall slot game, look out for them when you next play online as they feature sampled sound effects from the shows and even have characters and the stars of the shows as reel symbols!

Probably one of the biggest categories of branded slot games you will find readily available online are those that are based around blockbusting films, Microgaming have for example just announced plans to launch a range of slots based around Jurassic Park, and these slots will complement their already popular film based branded slots such as Hitman and Tomb Raider.

Playtech also have a large number of Marvel Comic Book themed slot machines on offer at casinos using their software platforms, and many of the characters of those comic books have also been made into films and cartoon series, a couple that stand out are the Incredible Hulk slot and the Iron Man slot game to name just two of them!

Branded and fully licensed slot games are certainly here to stay and on the increase, however never forget that the most important aspect of any online slot game is the actual payout percentage that the slot has been set to payout over the long term.

An online slot game can have the most famous theme in the world but it is only ever going to be an attractive slot game to play if it boasts an average or more preferably an above average payout percentage, so do your homework before choosing just which slots to play online, and make the wise decision of playing the slots with the best payout percentages!