Keno might seem like an ordinary dice game but trust us – it’s anything but. This fantastic game is quite popular in online casinos around the world.

However, before you start playing the game, it is useful to learn basic keno terms and slang. And that is precisely what CasinosOnline has here for you. Below you will find all useful online keno terms and definitions that might come in handy during your playtime.

This is a limit that all gaming sites set for keno rounds. Typically, you might encounter an aggregate limit for the winning amount or the number of winning players. If it is a limit for winning amount, the casino has set a cap for the max payout that winners get. On the other hand, the winning players limit refers to a max number of players that will get a prize once the round ends.

This is a unique form of betting in keno. Players bet on the entire ticket, so all digits must be drawn to get a prize. If only one is absent, there will be no payout.

Any keno variant with 80 balls.

The game revolves around eighty balls that the dealers draw.

The bank contains all cash that the casino has in the game.

This refers to the cash that each punter has in the game.

A clear card that player is yet to fulfill.

A blower is a machine that is responsible for the number draw. The most important part is the suction which pushes the numbers through the tube. In live dealer keno variants, the host takes the ball from the tube and announces to the audience the result (the winning number).

Bowl, or bubble, is the enormous glass drum where the balls are before suction.

A keno competition where all participants must pay to enter the contest. In most cases, they pay the entry fee and then play specified game rounds.

Before the draw, all balls are in the cage. The cage is a standard part of the whole machine in classic keno.

The announcement of the winning numbers.

The person who announces the winning numbers is the caller.

If the host draws a number that you highlighted, that is a catch.

This is a select type of keno where players must ‘catch’ all digits on the tickets.

Catch Zero is a reverse Catch All. In this variant, the goal is to avoid hitting any number on the ticket.

The final moments before the start of the round during which the hosts do not accept any new bets.

A ticket that includes multiple bets.

A ticket whose number selection was generated by a machine. The computer uses a sophisticated algorithm to create a random sequence.

If a player marks two adjacent numbers, it’s a deuce.

The process of extracting balls from the bowl during which they are announced as winning numbers. To put it simply, it is a single keno round.

Game stats for previous rounds collectively appear on a draw sheet. In online keno, all info is on the digital display.

Should a player highlight numbers close to the end of the ticket, he is making an edge ticket.

If punters use a single card for multiple rounds, they can receive an enhanced payout for that card. That card pays more than regular, separate cards in the game rounds.

A fee that punters pay for participation in an online keno tournament.

Exacta is a ticket with an exclusive payout rate.

The field represents the unmarked digits on a card.

The electronic board that shows drawn balls in a round in video keno.

A demo version of keno where you play with fictional cash for recreational purposes is free play.

A bundle of numbers that players checked on the card are a group.

A part of the keno machine that picks up a ball through the tube.

The total amount of cash that players wagered in a specific round represents the handle.

These cards bring more cash with more catches in a single round.

A card that has a high minimum bet requirement is a high roller card. High roller players typically use this type of cards.

Drawn balls that match numbers on a players’ cards are hits.

Hold is the remaining cash that the venue keeps after it pays out all winnings in a keno round.

An alternative name for the casino.

A regular ticket that a player highlighted and submitted to the operator.

The main prize that players compete for in keno.

If a player decides to highlight only one digit for a round, that digit bears the name King.

King ticket is a card containing only one marked digit, i.e. the King.

Like top bottom (see below), this is a special ticket with a vertical line that splits the card into left and right sides. You must try to hit as many numbers on the side that you wagered on.

Besides online (video) keno, you can also play this game in real-time. If you visit live casinosand enter a keno variant, you will play live keno variant. This variety includes live dealers and casino staff that controls the game.

Marking is the act of choosing numbers on your keno ticket.

A ticket that can be used for several game rounds is a multi-game card.

Certain keno variants offer Multipliers. The Multiplier feature doubles the cost of the keno ticket, but it gives the players a chance to boost payout up to 10x. The added Multiplier boosts the card if a Multiplying number is drawn. 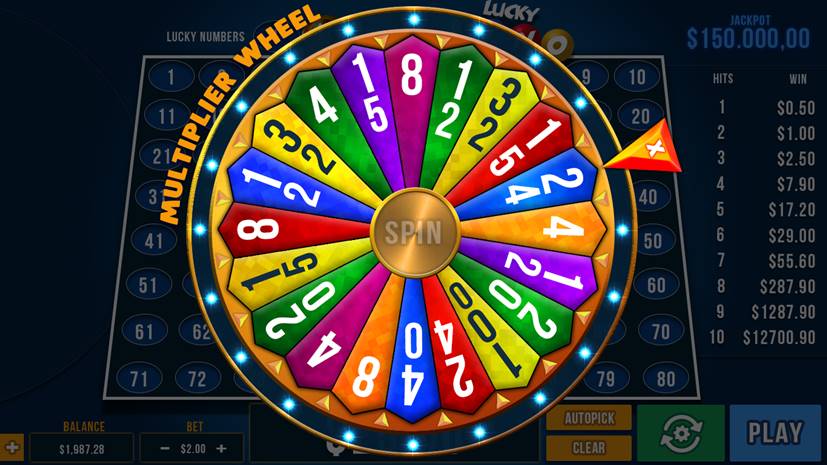 The net win is the total amount that you can get from the game after you deduct the wager for the round.

Odds in casino games represent the potential of the game, or better yet, the winning chances.

Open means that the keno counter is still accepting wagers.

After a player submits his inside ticket, the casino will give him an outside card as a replacement.

It is not rare to find punters that pick numbers based on some superstition. In most cases, they follow a pattern for selecting spots.

This ticket pays out the fixed amount regardless of the number of hit digits.

The pay table is the legend where clients can view max payouts for each outcome and wager.

This option enables the player a chance to participate in one round with his chosen numbers.

If a punter decides to reuse his chosen numbers, he can do so by opting for ‘Play 5’. With this feature, the next five rounds will employ identical spots.

Just like in any other online casino game, keno features a growing prize pot which augments with each wager.

In old-school keno, it is common to find sheets with stats from previous rounds. More specifically, these papers show winning numbers punched out for better navigation. In modern online casinos, 3D loading screens replaced this tradition.

If the winnings match the wager, the result is a push. The player receives back the exact amount that he/she placed on a bet.

This exclusive option selects the numbers instead of the players. It is similar to the Autoplay option in video slots.

If a punter decides to withdraw from the game by cashing in the ticket, he quits the race.

The race is a colloquial term for one keno round.

The financial value of each ticket is the rate.

A synonym for pay table.

Random Number Generator (RNG) is, as the name suggests, a random software that providers and casinos use to guarantee safety. The main point is that the software uses a complex algorithm which picks numbers in an unpredictable sequence. Therefore, it is impossible to predict future outcomes. Each draw is unique. Video keno, like most online casino games, uses RNG to draw the numbers.

A regular or straight ticket is the foundation of keno. A simple ticket for gameplay.

Casino staff members whose job is to collect winnings and distribute them among the players are runners.

If a player misses his chance to cash in his ticket by reporting it to the venue, the operator calls that a sleeper ticket.

When punters create several number bundles to wager on, and on a single ticket. The term describes that the card is ‘split’ into groups of numbers.

A digit that you selected on the ticket is a spot. Typically, players differentiate cards by counting the number of spots on a card. So, for example, if you have outlined five spots, it’s a 5-spot ticket, etc.

Stud is the keno variant with progressive, i.e. growing prizes.

This is the same as the regular ticket.

Tickets are the foundation of gameplay in keno. Players use these cards that contain eighty numbers to highlight their chosen numbers. As the round progresses, players see which digits hit, and which do not.

Tickets come in various shapes and sizes. However, the one that has a smooth line right across the middle is the top bottom card. The line divides the upper and lower parts of the card. If you are using this card, your objective is to strike digits on a specified side.

Keno tournaments are special events with competitive purposes where punters play against each other and the gaming site.

This game version enables the players to enjoy keno using only their computers. Some players call it online keno.

The way is the alternative wager that one can place on a ticket.

This form of tickets includes a number selection that creates two different wagers.

In each Keno round, 20 numbers come out as the winning numbers.