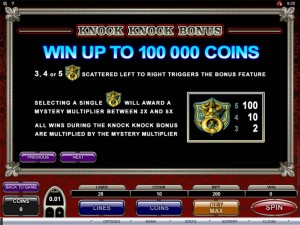 This is a simple picking type of game, however what attracts players to play slots which have such a bonus game on offer is that they do tend to trigger quite often and as such you will always find you get quite a number of these bonus features being awarded to you when you play the slot for a reasonable amount of time.

Having said that, pick to win types of bonus games are not to everyone liking as many players much prefer to play slots on which they can be awarded with a set of free spins or even a wheel spinning based bonus feature round!

But if you do enjoy playing slots which come with one of these unique bonus rounds then let us now enlighten you on how you are awarded it and how you play it off and also just what you stand to win when you are playing the Osborne’s slot and its knock knock bonus feature round is awarded to you!

How to Trigger the Knock Knock Bonus Game

The first thing that you do need to be aware of when playing the Osborne’s slot is that the Knock Knock bonus feature round is triggered by a set of Bonus symbols, these are quite different from the standard scatter symbols that usually trigger a bonus round in as much as they have to line up on an activated payline from reel one and then on consecutive reels.

So when playing this slot due to its 20 payline playing structure, you are best advised to play with all of those 20 paylines live and in play, for it you only play a small number of them your actual chances of trigger what could potentially be a very high paying bonus game winning payout will be dramatically reduced.

In fact if you only play one single payline, which we know penny slot players tend to do then you have twenty times less chances of being awarded with this bonus game! The bonus symbols that will trigger this bonus game are quite aptly door knocker reel symbols!

As soon as they spin in you will hear an audio clip of a door knocker knocking and as such you should make sure when playing this slot you have the audio settings switched on for a more exciting type of playing session!

How to Play the Knock Knock Bonus Feature Round

As soon as you have spun in at least three of those Door Knocker Bonus symbols on an activated payline and they have formed from reel number one onwards, then the bonus game will be triggered, and the base game slot game will be replaced by the bonus game screen.

You are then tasked with picking one of those symbols, two of those symbols or three of those symbols if you have spun in three, four or five bonus symbols respectively and once you have clicked on each symbol a multiplier value will then be displayed on the screen, this is multiplied by the total number of coins you wagered on the base game spin that triggered the feature round.

In total if you managed to select all of the highest valued symbols when playing maximum bet spins and when you have spun in all five bonus symbols to trigger this knock knock bonus feature round you could win a payout worth 100,000 coins in total, so even if you have set your coin settings at just 0.01 you can still pick up a very large and impressive jackpot payout when this slot games bonus game triggers!

If you fancy playing this slot game but wish to give it a little play time in a no risk playing environment then you are always able to play it in the free play demo mode, all of our featured Microgaming casinos will let you sign up and log into their respective sites and play their range of games for free so that would be the ideal way for you to see if you are actually going to enjoy playing this slot for real money!

It should be noted that when you play any slot game online or for that matter in a land based casino if the game has a bonus pick to win type of round on offer, then the stakes at which you play that game for and the number of coins you activate is going to have a direct effect on just how much you stand to win when the bonus round is triggered.

If you only put into play the minimum number of coins or a modest number of them per spin you play then do not expect to win the higher winning payouts that can be awarded during the bonus game!

For the better valued bonus game payouts you are best advised to play for the maximum number of coins per spin the slot has on offer, and to enable you to be able to afford to do so you should adjust the coin settings down to ones your gambling budget will be able to sustain for a large and reasonable number of spins!