There is a new breed of Video Poker games that you can now access and play at Microgaming casinos, and as they come with a brand new type of playing structure and format we have decided to present to you a complete guide to playing these new “Level Up Video Poker” games as they are known.

The aim of playing any type of video poker game online is for you to play the game in such a way that you hopefully end the game with one of the many different hands as listed on the games pay table, the better the hand ranking the more you stand to win.

The basic playing format and structure has not been chanced on the Level Up Video Poker games, however what has changed is the way you play the game in regards to the stakes and winning payouts.

The staking structure of Microgaming’s Level Up Video Poker games is completely different to their standard and multi hand games, and as such whenever you choose to play any of them you are required to first choose the coin values at which you wish to play at, then choose from one to five coins per game you wish to play.

You are additionally obliged to pay four different stakes per game played, and as such if for example you are playing the Jacks or Better Level Up game, and set the coin values to 1.00 and opt to play all five coins per hand you will be charged 1.00 x 5 x 4 = 20.00. The reason why you are charged four additional total staked amounts is that you could play up to four hands per single game.

Once you have chosen the stake levels at which you wish to play then you simply need to click on the Deal button, and then five random cards will be dealt out to you. Next you have to decide which of those cards to hold (if any) and then press the Draw button.

Upon pressing the Draw button any held cards will be locked into place in that hand and all other cards in that hand will be removed and replaced with a new card. Should you form a winning combination on that first hand then your winnings will be credited to you and the game will then move onto a new level.

The second level will see five random cards drawn out and you are then faced with holding and locking any of those cards into place and then you need to click onto the Draw button whereby any un-held cards are replaced, much like the way you played the base game. However, any winnings formed on this second level will be increased in value by x2 their usual pay table listed values! 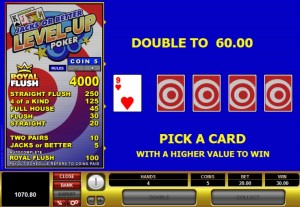 At random when playing on the first, second or third level of the game you may be awarded what is known as a Free Ride card, and when this is awarded then win or lose on the hand you are about to play you will automatically be moved up to the next level once the current hand has been played out.

Any winning payout awarded when playing a single game of Level Up Video Poker will see you being offered the optional Gamble game. If you take this option you then are presented with a bonus screen, one card with be dealt face up on this screen and you are then forced to pick one of the four face down cards.

If the face down card, when revealed, is higher than the initial face up card you will be awarded a winning payout worth two times your gambled amount however a losing selection will see you losing the amount of cash you chose to gamble on this bonus gamble game!

Below are the currently available Level Up Poker games on offer at Microgaming powered casinos, should you wish to play any of the highlighted games then both a free play and real money option are offered.

Aces and Faces – The first Level Up Video Poker game that may be of interest to you is the Aces and Faces variant, it is worth us pointing out that a set of enhanced payouts can be dealt out to you when playing this game and all of them are of course listed on its pay table.

Deuces Wild – With four Wild 2 cards in its deck then Deuces Wild Level Up poker game is one on which you are guaranteed to get dealt the most winning hands! Give it a little play time for it does offer a very entertaining playing structure thanks in no small part to those Wild cards!

Double Joker – The main difference between the Double Joker Poker Level Up Poker game and all other variants is that is comes with two Wild Joker cards, which stand in for every other playing card in the deck and could, when it is dealt out, help you form winning combinations from losing hands!

Jacks or Better – If you wish to try the Level Up Video Poker games then one you should consider trying first, thanks to its very easy to understand playing rules and payouts is the Jacks or Better game. Always play with all five coins per hand in play to have the chance of winning the enhanced 4000 coin jackpot!

Joker Poker – Not only does the Joker Poker game come with an extra Wild card in play in its deck but the jackpot on offer on this game is the highest one found on any Level Up Video Poker game variant that being a very large 5000 coins!