Dead Man’s Hand Poker – Should You Be Afraid?

We don’t know about you, but the thought of the dead man’s hand poker gives us strong Nick Cave vibes. We can almost hear his Red Right Hand humming in the background as well you about the infamous card combo in poker.

With the ambiance off to a good start, let us tell you all we know about dead man’s hand poker.

Why Is It Called A Dead Man's Hand?

What Does Dead Man’s Hand Mean in Poker

Who Was Wild Bill Hickok?

Why Is It Called A Dead Man's Hand?

First things first, this poker hand has nothing to do with Xylaria polymorpha, a mushroom also known as dead man’s fingers. We thought to get that ambiguity out of the way.

What poker dead man’s hand is, though, can be found in the following lines.

What does dead man’s hand mean in poker? is the biggest question in the history of the card game. New and seasoned players alike want to know what the deal with this card combination is. Why is this poker hand so famous? Is there a reason to be wary of it?

The history of poker registers the dead man’s hand as a legend and something of a fun fact. It’s fun to learn about it but honestly nothing to worry about.

Let us tell you a quick back story, which should explain why believers in bad luck avoid this hand at all costs.

On August 2, 1876, a party of five-card stud took place in a saloon in Dakota Territory. A man named James Butler Hickok (Wild Bill Hickok) suffered a lethal gunshot wound in the head. The cards in his hand as he fell down to the floor? Two black Aces and two black eights.

It was Jack McCall who shot Wild Bill, reportedly because he was seeking revenge. Rumors have it that McCall intended to murder another man. But those details don’t matter as much anymore. What’s left behind is the chilling myth of the dead man’s hand poker.

What Does Dead Man’s Hand Mean in Poker

The dead man’s hand meaning in poker is still influential to date. Every experienced gambler – online or offline – knows this story.

If you’re new to the crew, welcome! The CasinosOnline.com team is here to inform you about this poker hand’s notoriety. We determine its role in card player circles, and how contemporary punters view the card combination.

When it comes to the poker dead man’s hand, it has to do with the circumstances it is remembered by. As described, we recall the hand from quite an unpleasant scenario. Taking place in the hazardous Wild West doesn’t help either.

The story of the dead man’s hand is one of passion, vendetta, and punishment.

For those of you who’d like to know more, here it is. Namely, it is unclear who coined the term “dead man’s hand”. However, a couple of books testify that it’s been around since at least 1926.

That year, Frank Wilstach wrote a biography novel Wild Bill Hickok: The Prince of Pistoleers. Wilstach was the first to use the phrase dead man’s hand poker in print.

Fans of the written word might be happy to learn there are more books about this gloomy occurrence. Western historian Carl W. Breihan allegedly met the son of a man who was present on Wild Bill’s Doom’s Day. According to the bystander’s heir, Mr. Christy, the dead man’s hand consisted of:

Plus, the queen had a blotch of Bill’s blood across it.

And that’s the legend of the cursed poker hand.

Who Was Wild Bill Hickok? 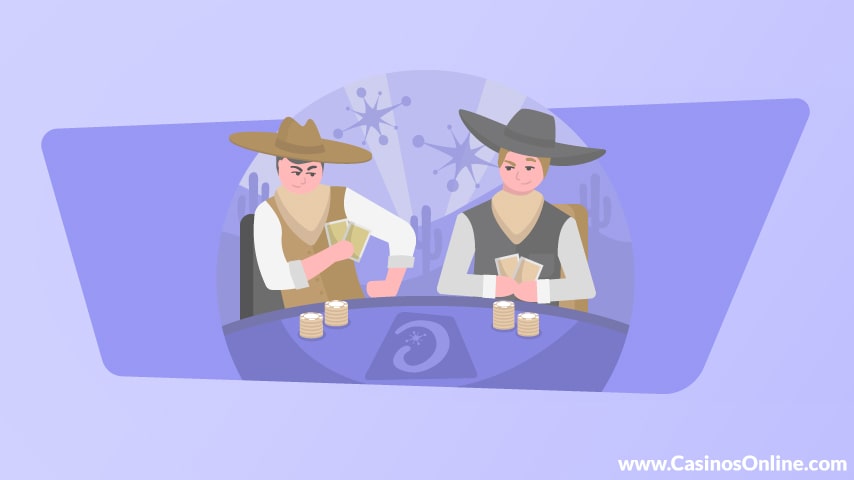 In his homeland, James Butler Hickok was famous as a soldier and frontiersman. Born in 1837, he lived a dynamic life and passed away before he turned 40. A proper showman, James soon received the nickname Wild Bill. Whether it was because of his involvement in gunfights or something else – who knows?

Wild Bill was untameable in many ways. We guess it only made sense he left in style. His active and exuberant lifestyle wouldn’t allow him to leave earth peacefully.

Hickok would go around town making up captivating stories about himself. His contemporaries never knew what he said was the truth and what was make-believe. But what they knew was that he knew his way with guns and that he loved poker more than anything.

Wild Bill Hickok always carried a pistol around. His favorite was a .36 caliber revolver. The gambler movie from 1953 Calamity Jane shows Hickok showing off his gun. If pop culture gambling is something you might be into.

A few other cultural depictions of Wild Bill can be found in libraries and media houses. In 1923, there was a relatively successful silent film Wild Bill Hickok. In 1977, Charles Bronson starred as Hickok in The White Buffalo. The latter motion picture is much more metaphorical than most others.

Poker Hall of Fame is the epitome of success in the game of poker. The ultimate honor a poker player can reach is to be recognized by the Hall. Hickok was inaugurated into the Poker Hall of Fame in 1979, the same year the Hall was founded.

The names of Johnny Moss and Nick the Greek also settle in the group. Walter Clyde Pearson, known as Puggy, who came up with freeze-out tournaments is also featured. We’ll chat about prominent poker players of Hickok’s time later on.

In today’s modern world, the dead man’s hand poker is but a superstition.

The 21st century has brought about many changes in the way poker players view the game. It is much more about the skill and less about superstitions.

However, there are still punters who’d rather avoid this hand. Just in case.

While at it, let’s discuss a few other poker superstitions that have remained alive and kicking. Although it’s time to bid them goodbye.

Beginner’s luck needs to be kicked off this table. In poker, it’s considered bad luck to win the first hand. What do you think about this? Drop your opinion in the comment section below.

The next traditional no-no at a table concerns switching seats. You’re getting uncomfortable and would like to move? Think twice because the gods of poker might frown upon your involuntary fidgeting. Switching your seat will not bring good luck if that’s what you think.

Do you subconsciously link your outfit with a happy event that occurred while you were wearing it? We hate to break it down to you, but it’s completely random. No lucky hat, shirt, socks, or lucky charms will bring you a better hand. Rather, stick to your poker strategy and play wisely.

Unless they give you a strong sense of security, we’d suggest dropping any poker superstitions now. It is a false belief after all. Instead, rely on your skills and that perfect poker face you’ve worked so hard on. 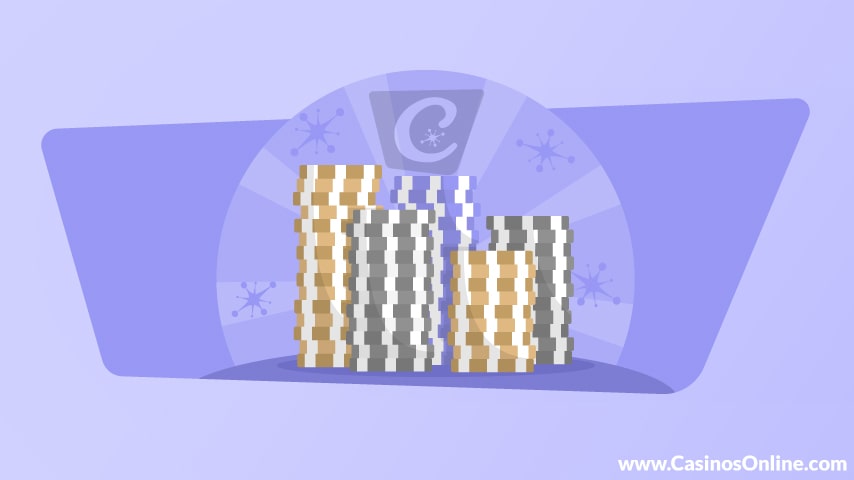 To paint the picture of how it was living at the time of the poker dead man’s hand, here are legendary 19th-century poker players.

·         Nick the Greek – Although he gained recognition in the 20th century, Nick Dandolos was born in Greece in the 1880s. A famous high-roller, Nick stays remembered for his legendary performance in the 1949 5-month-long tournament. In his lifetime, Nick the Greek faced the likes of Johnny Moss. Legend has it that Nick personally knew Albert Einstein and allegedly toured him around Vegas.

·         Tom Abdo – Alongside Wild Bill, Tom Abdo also finds his name in the Poker Hall of Fame. Abdo lived for poker until his last breath. Reportedly, Abdo was playing the game when he felt a heart attack coming on. He asked a player to keep his seat, intending to return to the table, which he never did.

·         La Tules – Maria Gertrudis Barceló was the first female casino and saloon owner. Born and raised in Mexico, Maria Barceló got interested in gambling from a young age. This independent Doña hadn’t turned 30 when she opened her own casino in New Mexico. Her nickname, La Tules, may refer to her full-bosomed physique or could be just short for her surname. We’ll never know.

·         Alice Ivers – Remembered as Poker Alice, Alice Ivers is a legendary poker player who remained notorious in the gambling circles and in the eyes of law. Whomever she married ended up dead in a couple of years. A coincidence? It’s hard to know 200 years later. But Poker Alice is one of the most successful, extravagant card players this world has ever seen.

Moral of the Story

We think we’ve answered, “What does dead man’s hand mean in poker?” This hand has as much meaning as you ascribe to it. But regardless if you’re superstitious or not, we see no reason to be afraid of the dead man’s hand. For more video poker tips and tricks, visit this page. And if you have questions about this topic, check out the FAQ below.

The dead man’s hand originates from the Wild West and the real-life story of James Butler Hickok (Wild Bill). Reportedly, he was holding a pair of black aces and a pair of black eights when he was shot in the head.

The dead man’s hand in poker is a two pair, meaning it’s a decent hand. However, a two pair gets beaten by many other hands, such as any flush, a straight, and even three of a kind.

Four aces may refer to many things. In poker, 4 Aces make a four of a kind. In plain English, only a straight flush and a royal flush beat four of a kind.

The best hand in poker is a royal flush. A royal flush consists of A, K, Q, J, and A, all of the same suit. Some players refer to is a straight flush from 10 to Ace.

Technically, you do not need to call your hand at a poker table. According to the rules of the game, the best visible hand wins, regardless of what name anyone says. Particularly, casinos in the US strictly go by the “cards speak” rule.