Does all the terminology about casino hold’em poker confuse you? Are you afraid you wouldn’t be able to understand what the dealer is saying? Then, this article is for you.

And even if you’ve been in Casino Hold’em for a while, we’re certain you’ll benefit from this glossary. The following list consists of all the relevant terms you’ll hear in a game of Casino Hold’em.

If you want to ace this casino game, browse through all the terms and definitions. To help you in your search for a specific term, we organized the list alphabetically. Check it out.

Ace in the Hole

When one of the player’s hole cards is an ace (A).

To make a move.

Acting out of Turn

Making a move before one’s turn, usually to confuse other players and trick them into seeing their cards.

Like in most casino games, the action refers to the total of all money that has been wagered in a session.

When you put your whole chips stack into play, you’re going “all-in”.

A psychological strategy when a player manipulates another player to be able to see his or her cards.

In every poker variant, the ante is the initial bet of each player. 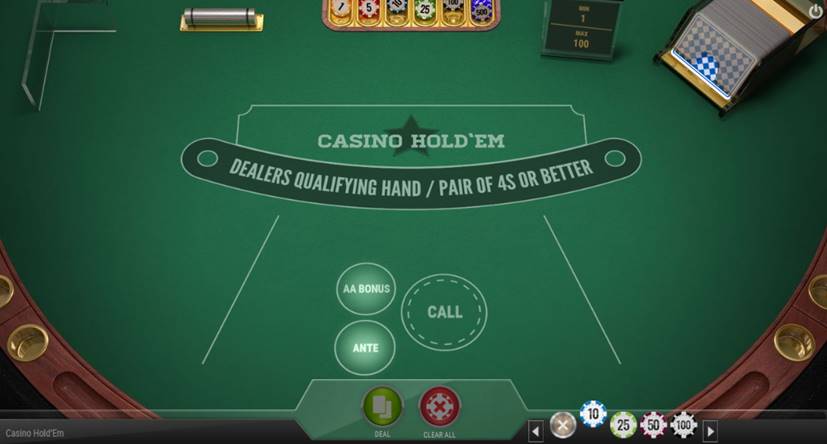 The amount of money that a player deposits onto their online casino account. Alternatively, in land-based venues, that’s the money the player I prepared to wager on that day. Also known as the balance.

A card with no value to the player.

A type of a forced bet which is placed before the cards are dealt. Its goal is to help maintain money in the pot. Theoretically, without a blind bet, the game could have no end.

The set of community cards.

The process of entering a Casino Hold’em tournament is called “buying in”. The buy-in includes all fees and additional costs.

Burning involves removing the top card from the deck out of the play. Then, the card is placed facing down with other discarded cards.

Calling a bet is matching the same amount that has been put in before you.

Checking in poker refers to passing the action to the next player. In land-based venues, checking is signalled by tapping on the table with one or two fingers.

To check raise means to first check and then raise the bet amount.

In poker, coin flip is a situation where two players have the same chance of winning.

Calling and raising the bet at the same time. A cold call is used when a player wants to hold more bets than one. Typically seen in Texas Hold’em, a cold call is the scenario when a player raises in the pre-flop stage and another player calls it.

In poker, a pair of kings is referred to as the cowboys.

Dead money is the money wagered by the players who have folded.

When the dealer or croupier deals, he or she is distributing the cards to the players.

How deep are you? could be asked at a poker table meaning how much money you have left.

A draw-out is the scenario when you receive a card that saves you from an almost 100% loss by improving your hand significantly.

The drop is the fixed amount of money taken from the pot.

If you receive even money, you won the same amount you wagered. In payouts, even money is expressed at 1:1 (1 to 1).

Calling a bet without raising the amount.

Calling an opponent’s bet with no made hand of your own. Setting up a bluff for later. A float is usually performed by advanced players.

A flush is a hand containing 5 cards of the same suit.

Forfeit interest in further playing; leaving the game. The same as to pass.

Any type of bet that drives the game further, such as ante, blind, late blind or bring-in.

Four of a Kind

A hand consisting of four cards of the same rank and one card of another rank.

A poker game in which at least one player remains in long enough to take all the money in the pot. Often used in poker tournaments like the World Series of Poker (WSOP).

A hand in which the player has the cards of the same rank plus two cards of a different rank but mutually matching. For example, three sevens and two Queens make a full house.

If you gave away, it means you accidentally revealed your card to another player.

A hand containing random cards that don’t form a valid poker hand. The only potential in this hand is the sole high card. Other than that, the hand is useless. Many players consider this the worst poker hand possible.

A class of popular poker games like Casino Hold’em or Texas Hold’em. In them, players receive between two and four cards as well as five community cards.

The cards dealt to the players facing downwards. Often seen in games like Hold’em and Stud Poker.

The operator or venue that operates the game, also known as the casino.

The extra card in Hold’em Poker used to accompany the primary value of the hand.

When a small and a high card are played in a hand which has caused for the hand to depend on the same high card and a bigger kicker.

In some casinos, payers are allowed to place a blind bet and bet immediately afterwards. This situation is referred to as the late blind.

The main pot is used in case of side pots.

The pile of folded cards or cards that have been burned or discarded.

A poker variant which has no set max bet. Generally, they host high-rollers.

Usually heard in Hold’em poker games. A nut or nut flush is the best hand in its class but it can be beaten by a full house.

If you’re on the come in a game of poker, the next card might seal the deal for you.

A pair in one’s hole cards that has a bigger value than the community cards.

A poker hand consisting of two cards of the same rank, for instance, two fives.

To stop betting; the same as to fold.

In Hold’em Poker, pocket cards are the same as the hole cards.

Two cards of the same rank.

Hole cards with a pair of aces in Hold’em Poker.

The same as four of a kind.

A flop with all different suits.

To increase the previously placed bet, thus forcing the other player(s) to bet more.

A range in poker is a scope of possible hands that a player might have based on probability. Trying to guess other players’ ranges is a skill typical of professional, seasoned poker players.

The percentage of the money that a poker room takes for services charged and calculated by the time spent in the room.

A winning streak is called a rush.

A player with a small bankroll (balance).

Jargon for awesome or amazing, e.g. He’s a sick player.

To respond to a raise by calling.

A hand with five cards sequential in rank but not of the same suit.

A hand of five same-ranked cards arranged in sequence.

Each round of cards.

A non-positional poker variant, meaning that not the same player starts each round.

The money a player brings with him or herself to a particular table.

Three of a Kind

A hand consisting of three cards of the same rank, e.g. three fives.

When a player is “going on tilt”, he or she is making foolish decisions by letting their emotions take control over their playing.

The fourth community card that comes after the flop.

Two cards of the same suit.

When a player is under the gun or in the spotlight, they are in the position where they need to react first with a bet.