Benefits of making all Achievements on the Thunderstruck II Slot 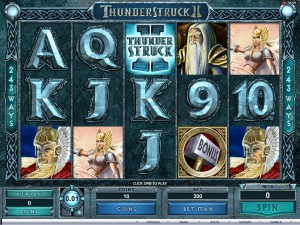 You may have seen, if you have been playing slots such as Microgaming’s Thunderstruck II slot game, a message appear on the slot screen when you have spun in a winning combination. The message alerts you to the fact that you have unlocked an “Achievement”.

If you are completely oblivious to what this actually means, then today we are going to explain what Achievements are on this highly playable online slot game. There are in fact two different types of Achievements attached to the Thunderstruck II slot. One sadly only gives you bragging rights, whilst the other gives you multi choices of how to play the bonus game!

Should you click on the View Pays button when you have the Thunderstruck II slot game loaded then you will launch the Pay Table of the game, and this slot is one of only a handful on which as soon as you get each winning combination spinning in, during your life time of playing this slot, the Pay Table and associated payouts for each reel symbols will turn Gold.

Whilst we have yet to see any advantages of turning each winning combination Gold when playing this slot, it will give you bragging rights amongst your slot playing friends, the idea of this Pay Table set of Achievements is of course to have a completely gold coloured set of payouts listed on the Pay Table!

The most advantageous set of Achievements that you can trigger when playing the Thunderstruck II slot game are associated with the bonus game feature, for this will give you a set of different ways to play out the bonus game round when it has been triggered.

The way in which you trigger the bonus game on the Thunderstruck II slot game is by spinning in at least three of the scatter symbols, and when you do you can then play off a set of free spins, you will initially only be offered one way of playing those free spins, however each time you trigger the bonus game round by spinning in the required number of scatter symbols then as soon as you trigger it a certain number of times another option will become activate.

This type of Bonus Game Achievement is more much beneficial to players, for if you do enjoy playing this Thunderstruck II slot game then as you get stuck into playing it more and more you should open up and make live the maximum number of options once the bonus game triggers.

We shall now guide you through the different bonus games which can be awarded to you as and when you spin in at least three of the scatter symbols, which for reference are the Thor Hammer symbols!

The only bonus game you are going to be able to take when you initially start to play the Thunderstruck II slot game is the Valkyrie bonus feature, this will see you playing a total of 10 free spins and as each one is playing out a multiplier value of x5 is attached to each winning combination that forms on the slot game reels.

As soon as you have triggered five individual bonus game rounds by getting three or more of the scatter symbols dropping into view then the Loki Achievement will be on offer to you, this will let you take this option and get to play out 15 free spins which come with a special Wild symbol bonus feature.

If the Wild Magic reel symbols drops in during any one single free spin on the middle reel then it will sprout arms like features and if they touch any other reel symbols as they are sprawling over the slot game screen then those reel positions will become wild symbols too, so the more reel symbols these arms touch the more chances you will have of being awarded a large winning payout!

This bonus game Achievement is unlocked when you trigger the free spins a total of 10 times, and when activated and chosen as the way your free spins will play out then you are awarded 20 free spins on which Ravens can and will swoop down and touch reel positions, and when they do those positions will become Wild Multipliers which will increase the value, often cumulative of any winning combination formed.

As soon as you have triggered the free spins bonus feature game a total of 15 times during your life time playing sessions on Microgaming’s Thunderstruck II slot game then the final Achievement on the bonus game options will open up.

This is the Thor Achievement and once opened up and activated if you choose to take this option as the way your bonus game round plays out then you will be awarded with 25 free spins in total and the reel structure will be one of a Rolling set of Reels, this means winning combinations that form during the free spins are credited to you then vanish from view with new symbols dropping in to replace them, new combinations formed via the Rolling Reels will be subject to an increased multiplier!

Many online slot players will not see the point of opening up the Achievements on the pay table of the Thunderstruck II slot game, and as there are no benefits of doing so it will be the bonus game Achievements they will be looking to unlock as they play this slot more and more.