There is a rich history to the story and development of baccarat and given that the game has developed through a number of European countries, it is not surprise to find that many of the terms in the game owe a lot to the languages used in these countries.

When you play baccarat, you will find that there a number of terms that are French, Italian or even Spanish in origin, all of which sit neatly beside the more traditional English terms. If you want to feel as comfortable as possible when you play baccarat, it makes sense to familiarize yourself with these terms.

This is a term found in many different games and it stands for the all the money a gambler will wager during one full gaming session.

If you are in Italy and are looking to play Baccarat, you should drop the T, because the game is commonly referred to as “Baccara”, which is another word meaning zero and again, it’s use here relates to the fact that 10s and face cards have a zero rating.

You won’t need to do great mental gymnastics to work out that Banco means bank or banker and this is a Spanish word. With respect to baccarat, banco is used to refer to the dealer, the person that runs the game, oversees the shoe and will deal and play all of the cards.

If you are playing in an English speaking company, the term Banker may be the one used but it means the exact same as Banco. An important thing to remember is that the nature of the game sees the banker having the best odds, which means that they will be more likely to triumph, although of course, nothing is certain when it comes to baccarat.

Banque is a different style of baccarat and it is played out with three hands, with the banker holding one hand and then there being two player hands. As the origin of the name suggests, Banque is more commonly found in Europe than in America.

A burn card is a card that is removed from the playing deck once the shuffle has taken place and this card is discarded, or “burned”.

Carte is a French term and it is where a player requests for another card to be given to them, which means that it is a way of saying “hit me”.

You will not be surprised to learn that “Chemin de Fer” is of French origin and it is the name for Baccarat in many places in France.

Coup is another word of French origin and it signifies a round in baccarat.

When a deck of cards is cut, it means that the cut is split into two after the shuffling of the cards has taken place. After the deck has been cut, it will be combined to provide a further mixing of the deck.

This is a specific tool, commonly made of plastic that is used to assist a player to cut the deck.

There are different forms of baccarat and the role of the dealer can differentiate in all of them. You will find that American casinos employ dealers at either side of the table but neither of these people will actually deal out cards! In the American version of the game, the dealer takes in the losing bets and pays out on the winning bets and the person that actually deals out the cards is referred to as the banker. It may be that at some point in the evolution of the game, the role of these people got mixed up somewhere!

Simply, the discard tray is where cards that have already been discarded or played are placed.

When a card is dealt facing down, it is referred to as a down card, or it could be called the hole card.

With respect to baccarat and all other games, the edge is the mathematical edge or advantage held. This is traditionally the house edge, because the casino will traditionally have some form of edge over the players and the edge is usually stated as a percentage figure.

Simply, a face card is one with the face of a person on it which means that the King, Queen and Jack are the face cards. If you are playing baccarat, the face cards have a zero value attached to them.

A flat bet is the term given to a bet that is played at the same level without any change on a repeated basis.

Also commonly referred to as the edge, the house advantage or the house edge is the advantage held by the casino over all of the players and this edge is usually voiced as a percentage.

In a casino, there will usually be a person supervising the different baccarat tables from a high position, usually, a chair, which leads to them being referred to as the ladderman.

Le Grande, roughly translating to “The Big” in English, is a French term for the natural 9 in baccarat.

Mini-baccarat is a game that is similar to baccarat but is played out on a smaller table and has slightly different rules. It is more popular in America than in Europe.

This is a slang term to denote a ten or face card.

Any time that an 8 or a 9 is dealt in the game with the opening two cards, it is referred to as a natural.

When cards are moved around the table in baccarat, the tool that is utilized to move the cards is referred to as a palette.

Punto is the Italian and Spanish term for “point” and it is commonly used to signify a player at the baccarat table.

When in a casino, a show is what holds the cards. A shoe is capable of holding up to 8 decks of cards at a time and it should enable the dealer to move a single card into the game easily and quickly. 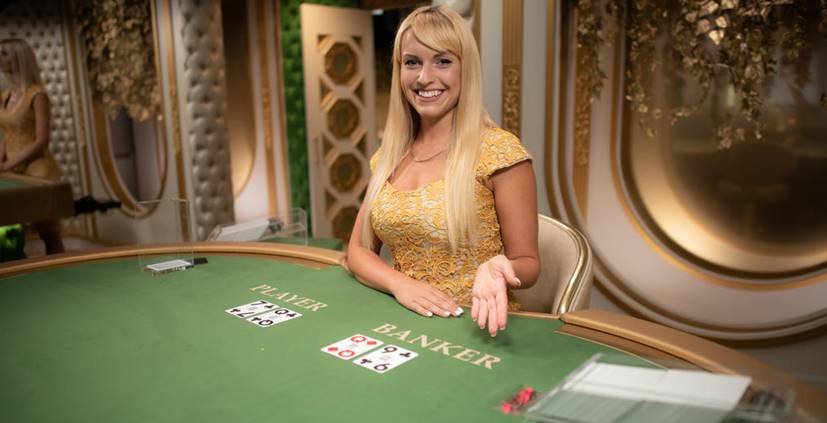 Anyone controlling the cards who believes that card counting may be taking place will carry out a shuffle up to change the order of the cards.

If you are looking for safe and reliable online casinos that offer Baccarat then check out our Online Baccarat section. Here you can find the best casinos that have been reviewed and rated by us.